The truth about Penguins...

I have been rather neglectful of this blog recently due to other writing projects that are taking over my life; I went from having almost life-threatening writer's block in January to writing an average of 5000 words a day.  Call me butter, 'cause I'm on a roll!  Anyway, I'd like to let you all know that I'm still a duck, I'm still singing, and I am, most importantly, alive.

Just before Christmas I discovered something quite amazing called 'Omegle' which is an online chatting service where you can talk to strangers.  To make this easier you can be matched with another stranger and, together, answer a question that has been posed by another user.  After having a rather fruitless argument with a 12-year-old girl about how feminism could be incorporated into Islam for over 45 minutes, I decided to ask some questions of my own.  Some were ignored entirely, but one question I asked got many, and varied, responses:

"What", I asked, "do you hate most about penguins?"

Penguins are, by nature and appearance, loveable, awkward little things, and, apart from a few fish, could never have been said to have caused any harm to anything.  (And who cares about fish anyway? JOKE, I love fish.) 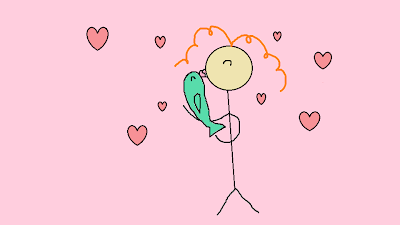 Anyway...I was sure that people could come leaping to their defense, and was rather surprised at the almost violent and sudden reaction I got from most of the strangers.  It seemed that I opened a whole can of worms.  You may notice that a couple of them have been slightly altered with paint- this was because some of the comments made were a little too obscene even for me and rather took away the humour from the rest of what was being said! Having said that, a lot of these people have used quite naughty language that I've kept in, like the F word and stuff, so if you are of a sensitive nature be careful when reading lest your eyes melt out of your sockets in sheer alarm.

Of course, some people didn't care in the least about penguins and were, quite frankly, wasting my time and theirs: 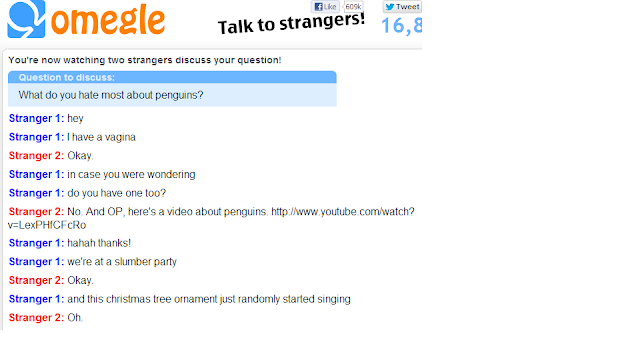 But those people aside, probably the most common reason why people hate penguins is the fact that they are flightless.  I think it's a little unfair to blame this on the birds themselves, but people on the internet are notoriously unreasonable. 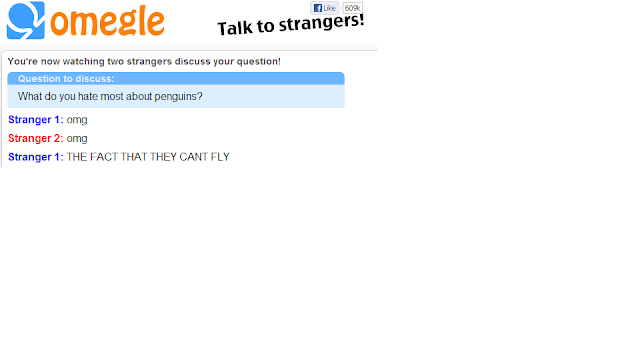 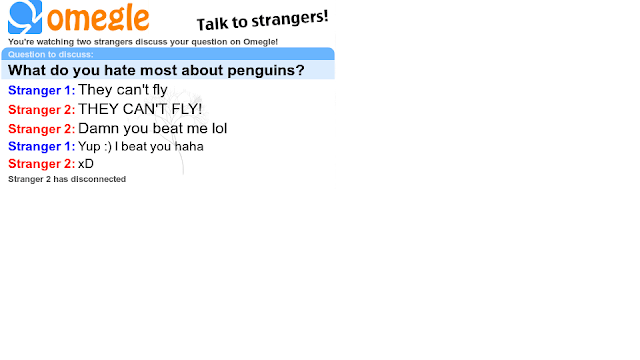 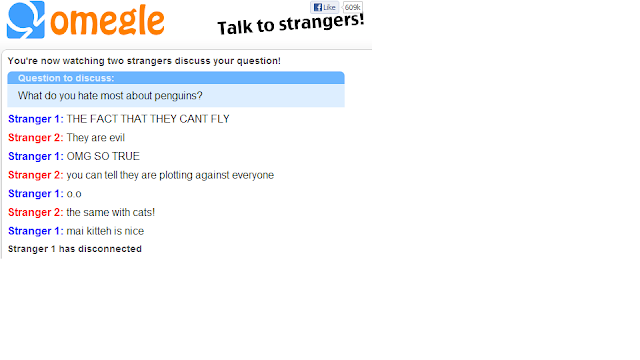 Stranger 2 brings up an interesting point here which is shared by, it seems, a fairly large number of people going by some of the other responses.  Have I totally missed the fact that penguins are going to destroy the world? I'd never thought about it before, but perhaps there is something quite menacing about them.  Their cold, dead eyes for a start, and the fact that they kind of fly, but through water, and are all wet and slimy a lot of the time.  I could quite easily imagine an Emperor penguin being the villain in a Bond film, and after initially seeing the new character on screen, I think that the public would accept it completely and forget after a while that there was anything odd about it being there.  Most people, however, were not so much fearful of penguins, but thought that they were a little big for their boots: 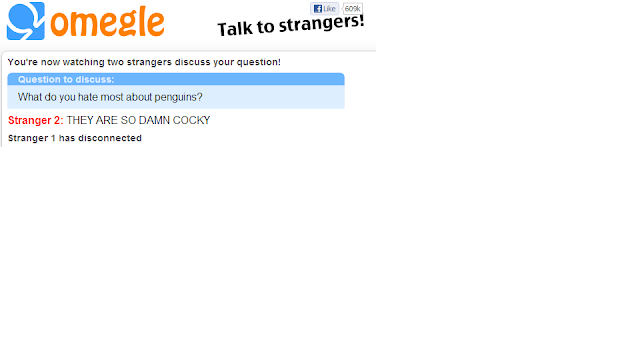 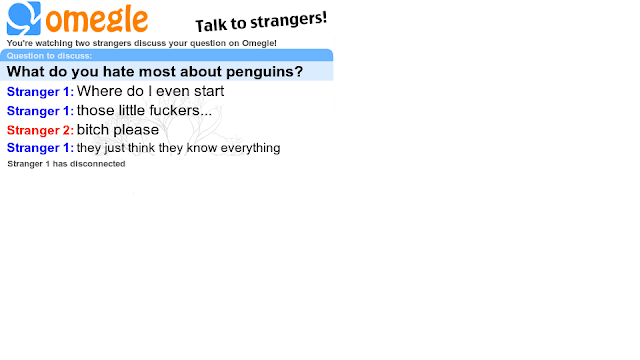 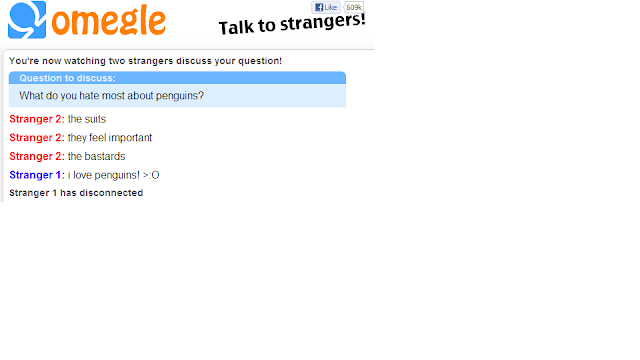 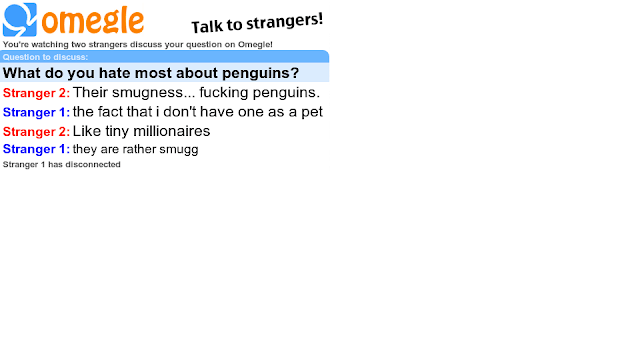 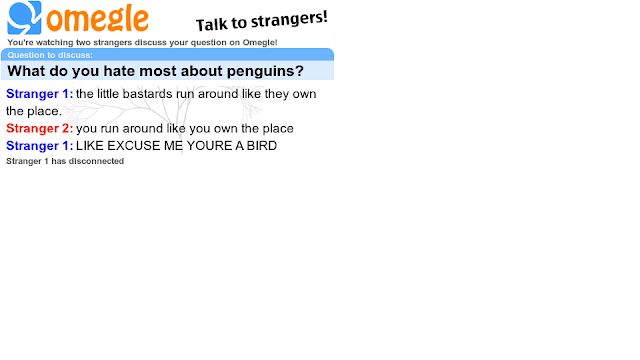 Again, I think it is a little unfair for humans to imagine that penguins are stuck up just because they look like they are wearing suits.  Firstly, we have surely learnt by now not to judge others on their appearances, but, more importantly, we don't automatically assume that humans wearing suits are smug either.  I can't imagine being on the London Underground and shouting at all the people going to work- "Look at you all!" I'd say, "You're so smug in your fancy, fancy suits!"  Also, I'm not entirely sure where people get the impression from that penguins think they know everything.  From what I know of penguins, they are perfectly happy making crazy noises, fishing, and mating for life.  There is very little about them for me that constitutes smugness. One pair of strangers seemed to have a whole scheme planned to overthrow them: 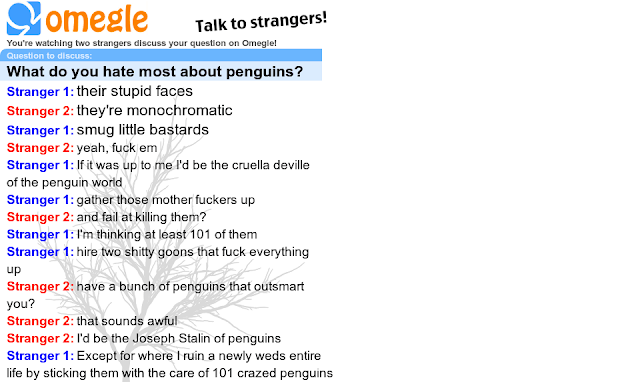 I rather like the idea of a newly-wed couple coming home to 101 penguins already in their house- sounds like my perfect life! The idea of monochromacity (if that is a word, which it isn't) came up rather a few times, but I didn't include any of them here because it often dissolved into some rather unnecessary use of quite offensive racial slurs.  In fact, I would have thought that penguins, being monochromatic, would have been looked on as quite trendy and 'hipster' these days.  Those penguins were wearing black and white before it was cool. 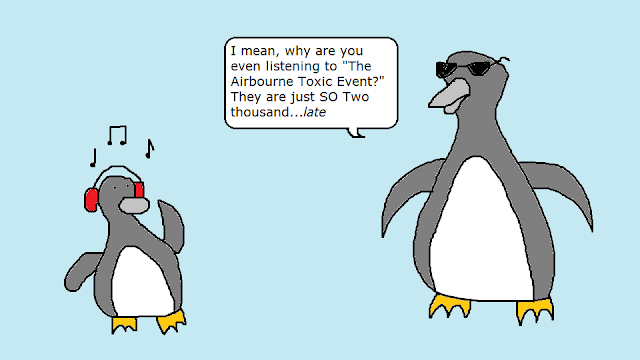 I don't quite know why one of the penguins is wearing sunglasses, but it's probably quite sunny in the South Pole sometimes and their eyes may get tired.  I know they have already coped fairly well for thousands of years, but perhaps such a scheme could be introduced for the future.  Some people, it seems, have perfect grounds to hate penguins if what they are saying is true: 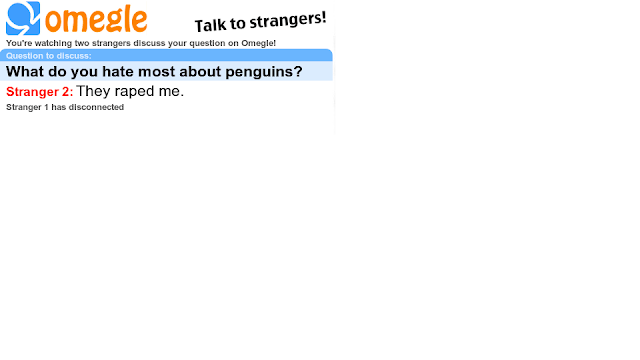 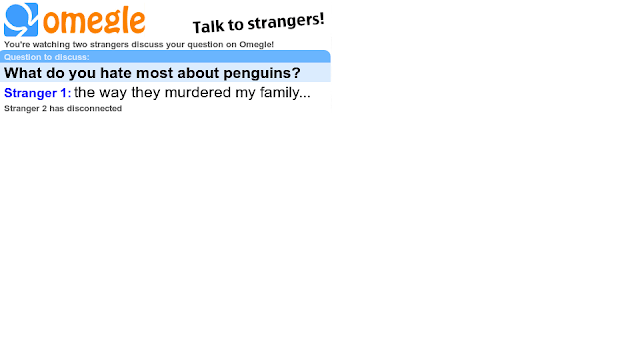 There were also quite a few that made utterly no sense whatsoever: 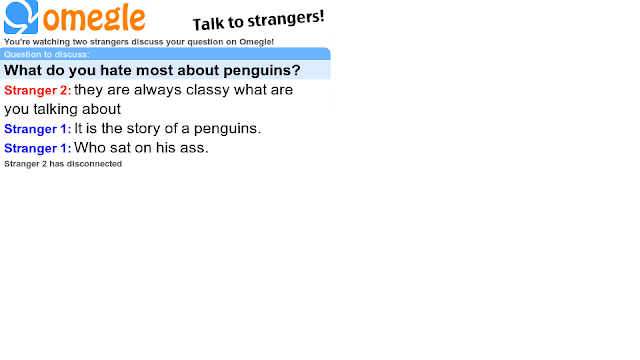 I'm upset that Stranger 2 disconnected here, as I was curious to hear the rest of the story, but this next one, out of all of them, was my personal favourite: 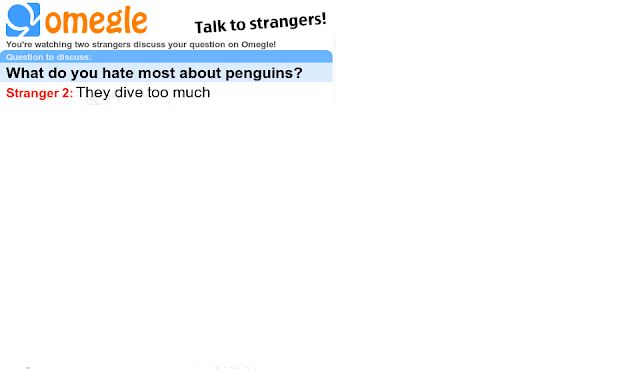 As it transpired, this person thought I was talking about the Penguins American Football team, but at first I found it hilarious that he answered immediately with something so completely random.  I had an image of him sitting at home watching a nature documentary, getting more and more angry as penguin after penguin dived into the sea, until he eventually explodes with rage: 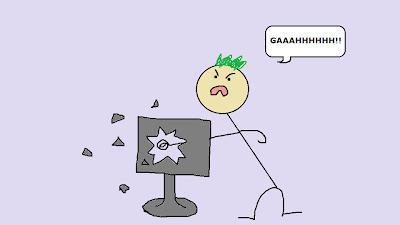 In conclusion, I don't think I've learnt anything in particular about penguins that I didn't know before, but I've certainly learnt that some people are very strange.