Funny things I have seen on my tour

One of the few pleasures I get from travelling round foreign countries is by laughing at foreign things.  This is grossly unfair seeing as I am not nearly as versed in other languages as much as most foreigners are in English, but I don't really care.  Funny things are funny, and I do hope tourists visiting Britain find as much joy in British weirdness as I do when I travel.  Some of these funny things come from misuse of the English language, and some are just there because they are funny.  This is a prime example of both: 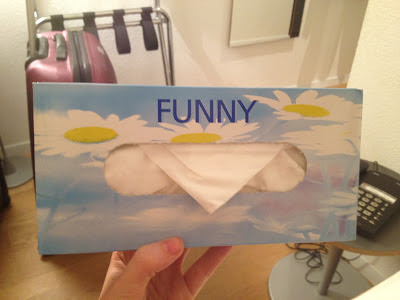 Whoever made the tissues is correct; they are, in fact, funny, which is a weird paradox as they wouldn't have been funny if they hadn't been declared to be 'funny.'

Some of the amusing things are apparently just normal things that Germans would find in shops: 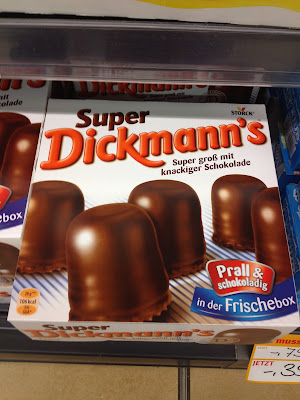 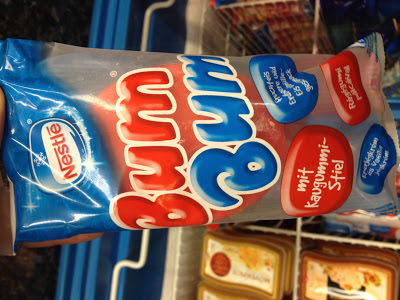 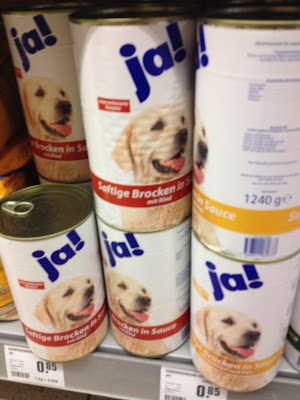 I'm not even sure myself why the last one is so funny- I think it's because I can imagine the dog saying- "Ja!" and it would please me greatly if a dog were to say that.  The exclamation mark just adds to the urgency of the golden Labrador's happiness.

A couple of the things aren't German at all, but I just found them hilarious: 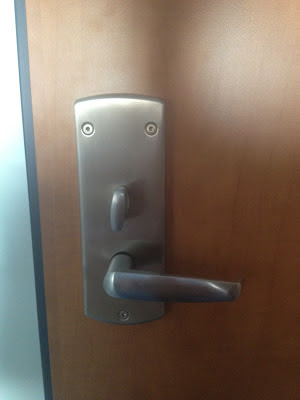 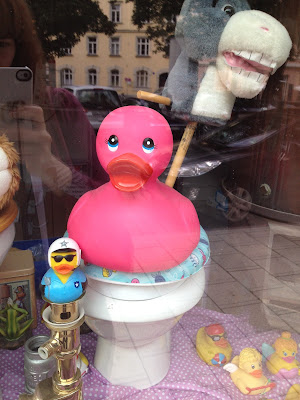 The door handle, quite obviously, looks like a very alarmed face which caused me to practically wet myself when I first saw, and the second amused me because I didn't notice the crazy donkey in the background at first and it took me by surprise later.

The next few are things that I just found very WEIRD, yet brilliant: 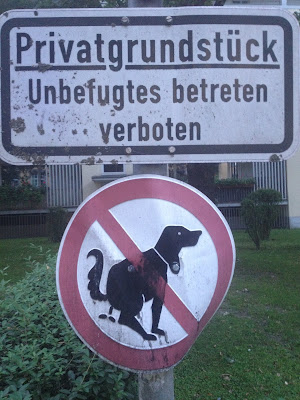 I am struck, here, by the astounding amount of detail that has gone into re-creating the act of a dog defecating. 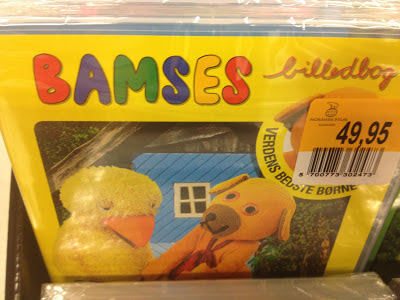 This was just an incidence of very poor positioning of a Children's DVD. 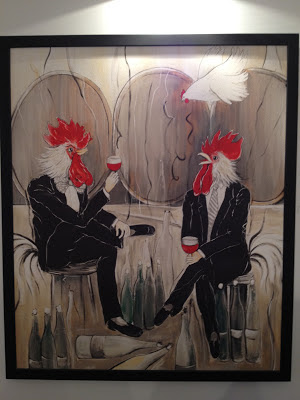 There was a whole series of these chicken pictures in one of the hotels we were staying in.  I found it a little disturbing that as well as the chickens wearing business suits and ballgowns, they were accompanied, in each picture, by ACTUAL CHICKENS, one of which, in this case, seems to be intent on dive-bombing the chicken-head humans enjoying their wine.  The whole series was utterly superb.

The following are in English but are still hilarious. 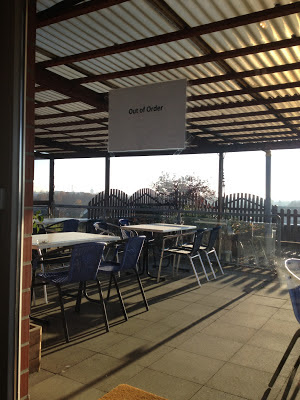 You see that? Outside is 'out of order'- that isn't good at all! 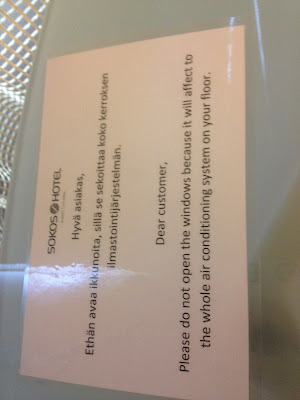 Apologies for the lack of rotation here- I hope the act of turning your head slightly to the left won't put you off my blog for good.  I liked this one because I can't help but notice a slight bitterness to the tone of it, as if they were exhausted with having to deal with air conditioning malfunctions and whenever anyone opens their window a crack loads of alarms and bells start going off and lights flashing crazily and all the staff going mental- "WE WARNED YOU!" They would say, brandishing knives in our faces.  "NOW LOOK WHAT'S HAPPENED!!!!" 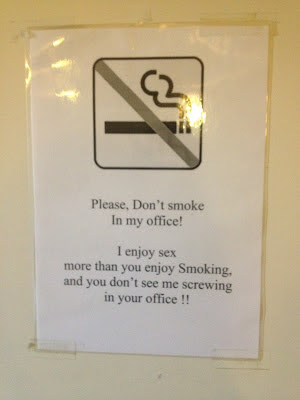 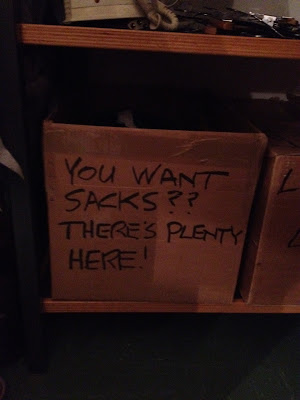 Why, thank you! I spent almost 2 solid hours chuckling at the over-use of punctuation this person used.  They really want you to take their sacks!

Lastly, here are some of my personal favourites: 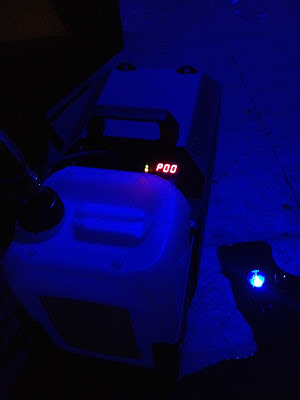 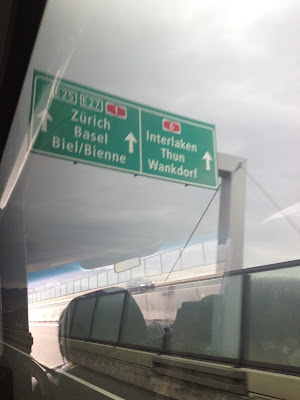 One day, when I'm old and tired, I'm going to take my husband and my ducks and llamas and we'll settle down in Wankdorf. 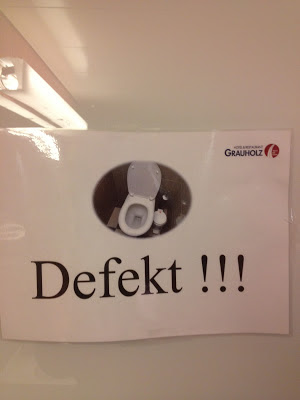 There are several things l like about this picture.  Firstly, the exclamation marks designed to stop someone going in, as if without them they would have proceeded anyway and died from shock at the sight of a broken toilet.  Secondly, their decision to include a picture of a toilet as if to further establish in the mind of the reader that it is the TOILET that is broken, not something else, like the door, for example.  Somebody, somewhere, will have gone through the trouble of finding a picture of a toilet and gracefully fading the picture into the white background.  Perhaps this is actually quite an easy thing to do, but it looks like too much effort to me.  Thirdly, the story behind taking this picture is almost funnier than the picture itself.  The first time I went in, I didn't have my camera, so I rushed back to the van to get my phone.  However, when I returned there was a girl in the toilet washing her hands.  Rather than allowing her to think that I had come into the bathroom to take a picture of this sign, I went into a cubicle and gathered a roll of tissue, and pretended to blow my nose for good measure when she looked over at me.  Five painful seconds passed before she left the room and I was able to take the picture, along with losing any shred of dignity that I was still in possession of. 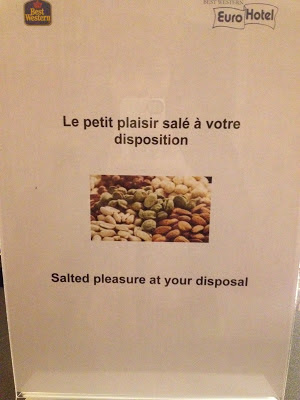 This, we found in Luxembourg, and is probably the best way of describing nuts and crisps I could ever imagine.

I hope you have enjoyed my funnies as much as I have, however I am very much aware that the sophistication of some of these is far above the level that most of my readers are used to, so don't worry if you don't understand all of them.