On Friday I stared directly into the ugly face of humanity and lived to tell the tale.  Let me set the scene:

It was a warm, refreshing evening at Disney World; joyful, excited parents, children, and teenagers became one as they enjoyed together the beautiful firework display put on by the park.  We all watched as Disney imparted his message to the world- “Make a wish, and do as dreamers do, and all your wishes will come true.” Tinkerbell flew overhead, sprinkling us all with magic dust.  The fireworks thundered to their dazzling climax, and left us all realising, for the first time, that we had no idea how we were going to get out of the crowds of people forming around us.  That’s when it became ugly.

We’d accidentally chosen to go to Disneyworld on the one day where the park was open for 24 hours; 6am to 6am.  This was great, we thought, as we’d be able to do the Haunted House ride when it was dark, and I’d get to go to the Enchanted Tiki Room as many times as I wanted.  Nobody, however, including the Disney World staff, had expected that 20,000 people being in the same place at the same time would cause a problem.

For those of you that haven’t been to Disney World, it is set up thus; in the middle lies Cinderella’s castle and a large circular area where people can stand to watch the fireworks and other shows that happen during the day.  Jutting out from this area are roads to other parts of the park, and a large path that goes back down to ‘Main Street’ and the park’s exit.  Because I am not a bird and don’t have a map anymore, I can only give you a rough approximation: 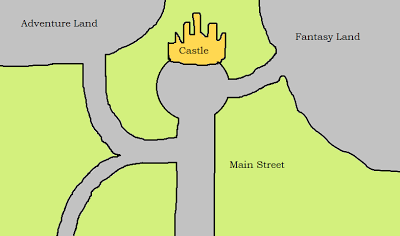 The trouble arose as a result of every visitor to the park being in exactly the wrong place.  Those families with children for whom the fireworks would be the final event of the day planned ahead and got close to Cinderella’s castle to watch the show.  Those people who had come just in time for the fireworks either from dinner or from other parks and who wanted to go on some more rides afterwards, came later and so were restricted to Main Street.  This meant that after the fireworks, everyone on Main Street wanted to get into the park (blue) and everyone who was already in the park wanted to get out of it (red): 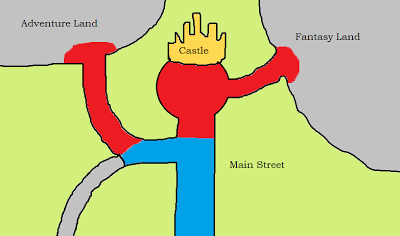 Being British and naturally inclined to queue sensibly and not minding waiting my turn to get anywhere, I was shocked and horrified by the inability of the workers at the park and by the people in the crowd to respond calmly and rationally to the situation.  Everyone panicked; everyone was shouting.  There was no camaraderie or “let’s make the best of this” attitude amongst the people there.  Three main groups of people formed:

1.   Entitled parents who kept making comments like- “my baby is tired, please let me and my baby through” when SEVENTY PERCENT OF THE PEOPLE TRYING TO GET OUT OF THE CROWD HAD TIRED BABIES.
2.   People who, with no regard to anyone’s physical safety, would actively elbow and shove their way through the crowd, even harming small children and older people while doing so; Foofy’s mummy got shoved in the chest and Foofy’s daddy got practically tackled to the ground.
3.   People who were overly sensitive to other people touching them and wanted to start arguments.

We started off halfway up Main Street and then turned left to, what we learned, was an exit that had just been opened up.  We were not going to use the exit, but we would be able to go North to Adventure land once the crowd coming South had cleared.  During this half hour we spent waiting for the people exiting to clear, we saw a woman shouted at by a worker because she tried to escape the crush by climbing over a barrier onto a patch of empty grass while yelling at the worker to "SHUT UP!", three first-aid emergencies (one was especially bad because some people in the crowd pretended to be with the ill woman so that they could squeeze their way out of the crowd before everyone else), and a man who threatened to kill the next person who touched his daughter.  This last man was absolutely justified in saying what he said, seeing as, moments before, somebody had pushed in front of him and practically sat on his little girl sitting in her stroller.

Just as we began to move, I came into contact with a particularly nasty woman who accused me of pushing her forward, when, in fact, Foofy’s bag had just brushed slightly against her bag as we moved into an available space beside her.  I’m not one to judge on appearance but she had the look of someone who was used to shoving herself about to get what she wanted: 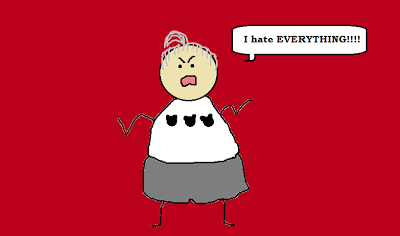 “You just PUSHED me!” She said, feigning injury.
“I didn’t push you.” I said calmly.
“We’re ALL GOING TO THE SAME PLACE! YOU MUST HAVE PUSHED ME BECAUSE YOU WERE BEHIND ME AND NOW YOU’RE BESIDE ME!!!!”

I didn’t bother to explain to the woman how crowds work, and that, if you are in a small group of two, like Foofy and I, it is helpful for EVERYONE in the crowd for us to move into spaces when they become available, like one did beside her.  She was in a party of about seven people so they were restricted.

“I didn’t push you.” I repeated.  “I would never push somebody.  I didn’t even touch you.”
She argued more, muttering to the people in her party about how rude I was.
“Are you sure you were pushed?” One of her companions said to her doubtfully.
“Well I didn’t just fall forwards!” She shouted back.
At this point I stopped walking.
“Please go in front of me.” I offered.  She gave me a filthy look.  “No, I’m serious, please go in front of me.” She gave me an even filthier look and carried on walking.  A person behind me helpfully said to me-
“Just ignore her, some people are crazy.”

At this point, the crowd moved more quickly and Foofy and I could escape up to Adventure Land.  By this point my delayed onset fear of people shouting at me had kicked in and I was openly weeping and bad-mouthing Disney World.

“This is a toxic, evil environment!” I cried.  “I can’t believe how RUDE people are! Rude entitled people!!!!”

I sat down on a chair for a bit and cried some more, then Foofy took me to the Enchanted Tiki Room, my favourite ‘ride’, to cheer me up.  By this time, however, the floodgates had opened and everything was setting me off: 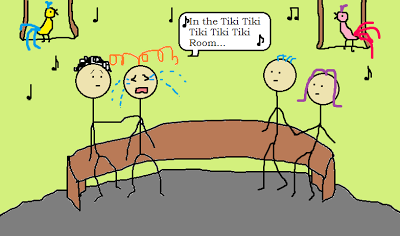 We later went to the Haunted House and I was set off once again by the site of a zombie dog that looked too skinny: 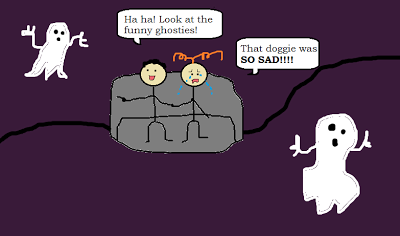 “IT PROBABLY STARVED TO DEATH!!!!” I yelled at the top of my voice. Foofy tried to reassure me by saying that the dog only looked skinny because it was dead, and that all the ghosts looked like they were having a terribly good time.  I was still crying when I got off the ride- I must have looked like a complete weirdo.

So, in conclusion, though I had a lovely time during the day at Disney World, getting to go on all the Mountain rides with my ‘Fastpasses’, the whole thing was tainted by the dreadful experience of the evening, which is the closest thing to a disaster movie I’ve ever seen in real life; in fact, Foofy’s mummy compared it to a scene from “The Blob.”  I’m amazed nobody was seriously injured.  Shame on you, Disney World, for your lack of crowd-control and allowing that many people to be in the park at one time.  SHAME ON YOU.