In Which I lose some Blood and gain some Perspective

I had some blood taken yesterday.  It wasn’t nearly as stressful as the last time I had my blood taken, which was when I was having a sensible routine STD test and they said- “Hey; would you like an HIV test too?” And I was like- “Hell yeah; #YOLO.” 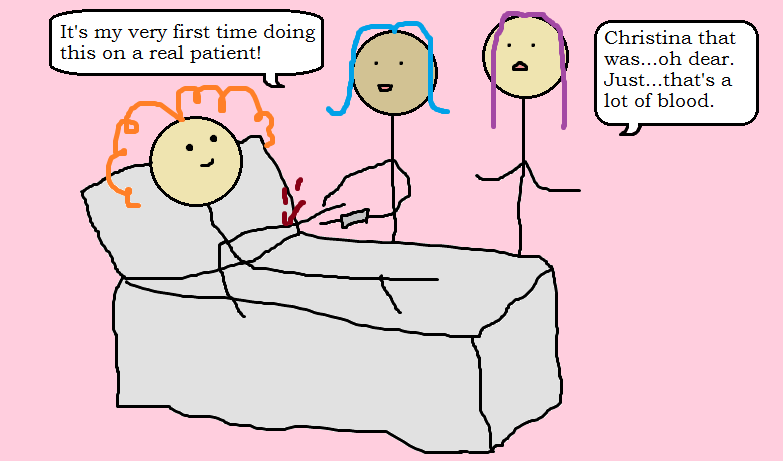 I’m all for people training on me because obviously they have to learn sometime, but when a nurse takes a needle out of your vein and goes “OH” and you look down at the crook of your arm to see a bruise rapidly spreading out under your skin and taking over your entire elbow area, it might put you off this kind of thing for a while.

So it was with trepidation that I ripped a ticket from this little machine that I associated with the shoe shops of my childhood then sat and waited until my number popped up on the screen.

Earlier on I had been poked and prodded by a neurologist and apart from realising that I don’t seem to have any reflexes at all on the left side of my body (!), she doesn’t think there is anything wrong with me apart from TOURETTES, but she is putting me in an MRI machine soon to be sure.  I’m not looking forward to this one bit.  Can you imagine being trapped in a tube with me for 20 minutes with no other stimuli to entertain you apart from my mad thoughts? I can as well.

Anyway.  I popped a Valium and waited in a drug-induced haze for twenty minutes until my number was called, upon which I stumbled over to the room and appeared with a glazed, terrified look on my face.  This would have been the time when I broke down and started screaming out of fear, humiliating myself in front of everyone in the neurology department at Ealing hospital, but I remained calm.

I remained calm purely out of embarrassment: from where I had to sit and have my blood taken, the entire waiting room of 50 + people not only could see me, but seemed to be actively staring at me to see how I would react to someone plunging a needle into the depths of my arm and sucking out my innards.  Self-consciousness took over fear, (though the Valium probably helped too) and I sat there gleefully smiling at the entire waiting room during the horrifying procedure. 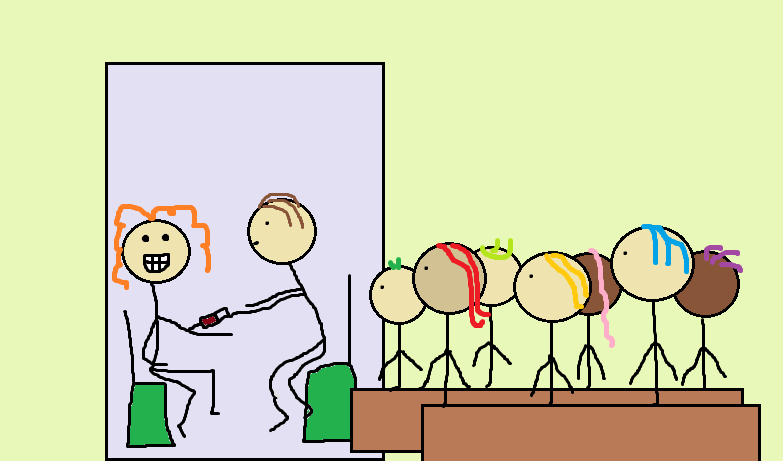 After it happened, I said to Foofy (who was waiting in the waiting room but kept switching seats in order to confuse me, but this, again, could have been the Valium.) “That really wasn’t so bad! It barely even hurt!” Taking the plaster off later, however, was an entirely different matter.

And thus I (probably only temporarily) cured myself of my fear of needles.  It only took some Valium and a room-full of people staring at me.

Ironically, it was my self-consciousness that got me into this medical mess I’ve found myself in… since writing my last entry about a million years ago I basically retreated inside my own head and became this very odd self-loathing machine who only seemed to have three settings: 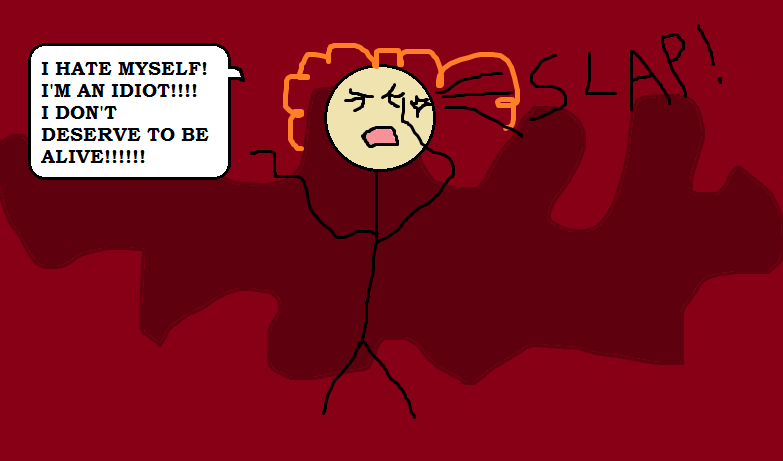 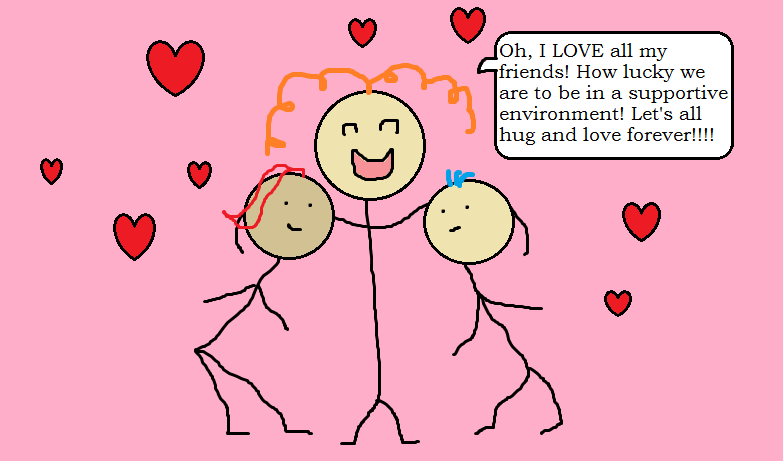 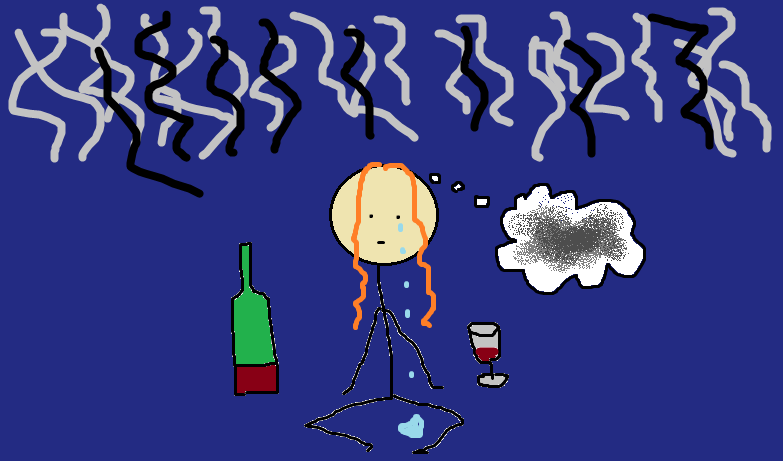 It’s not difficult for me to imagine where these feelings came from, seeing as my life for nine months (with occasional intervals for rest and refreshment) was basically this: 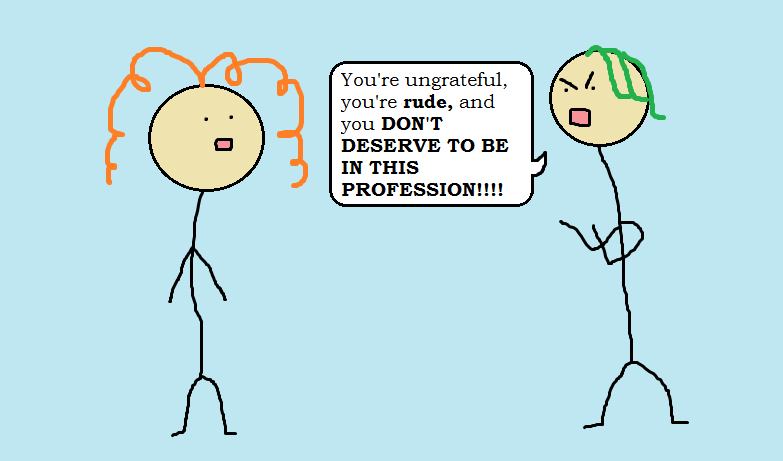 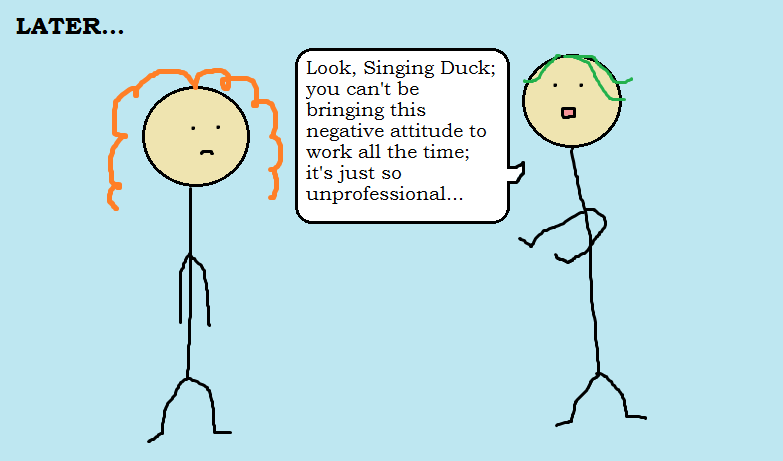 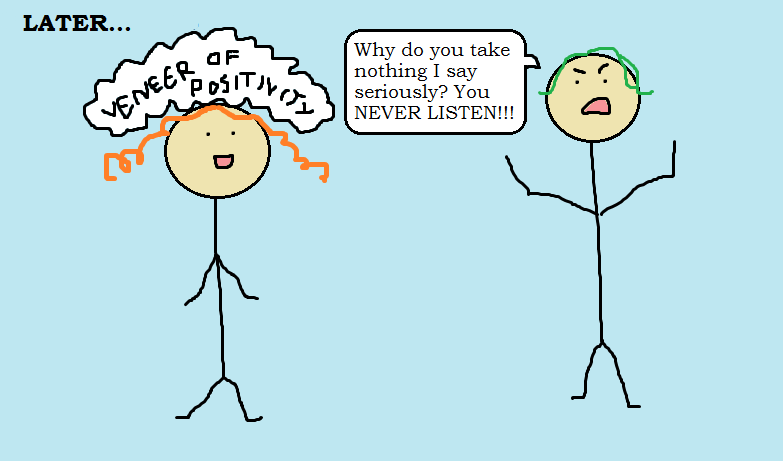 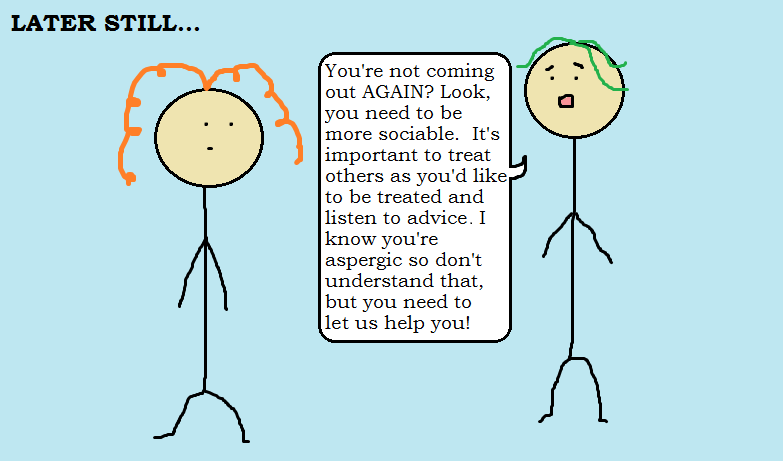 My problem is that I listen TOO much.  I listen and absorb every single insult and compliment that comes my way.  Although a lot of stuff I was told was completely valid, a lot of it wasn't, and the sheer amount of it I received was so overwhelming I no longer became capable of distinguishing between the two, and it made me question whether or not I wanted to perform on the stage or even if I wanted to be around people anymore. As I've said previously, if there was a job involving playing with puppies all day, I'd probably take it.

I used to think you only got post-traumatic stress disorder from going to war or losing a loved one.  Who knew you could get it from a theatrical tour? What a world!

After this happened to me, my brain got very scrambled and I started to believe I was all these dreadful things, and I began to wonder why it was I had any friends at all.  I started to push them away and refused to see people, and when I did see them I acted like a belligerent arse for no reason in particular.  However when life gets to the point that you have to down a large whisky at 11am in order to get out of bed for a full day of watching television and hating yourself, perhaps something should be done.  In my case, this something was registering with a doctor and getting some lovely pills which changed my life, even though I felt so faint when I first took them on the first day that I almost collapsed in Morrisons.  I don't feel I've had some kind of bolt of inspiration that's instantly made me a healthy, happy person, because I'm under no illusions that it'll take a short amount of time to reverse the damage that has been done to me, and the damage that I did to myself.  I am still hurt and delicate, but I am appearing in a production of HMS Pinafore soon, so it's not all bad.

Thus begins the journey to make myself into a vaguely normal human being, starting with sitting in an office and being lightly hit with a hammer and hopefully ending with me not having to nod my head every ten seconds and feeling like I actually belong on this planet.  HUZZAH! Not only this, I did another theatrical tour, and it was FABULOUS.  I’ll try and write a post about it soon.
Posted by The Singing Duck at 08:28