In Berlin zoo the other day, we saw these incredible creatures that looked just like massively oversized rats. (I would compare them in size to a large sausage dog, though you can get a pretty good idea of their size by looking at the apples in relation to them.) 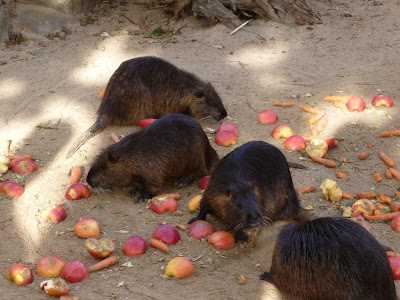 I was desperate to break into their enclosure and give them a hug, but, for obvious reasons I didn’t.  Seeing them, though, reminded me of a story from several years ago:

A long time ago I lived in a shared house at university.  It was a charming wee house that I spent three happy years in, although it had a slight downside in that 4 people were required to share a bathroom.  I’d lived in this house with three boys initially, and it was a complete disaster area in terms of mess the entire time.  As I said a few posts ago, I am not the tidiest of people, but when it comes to cleanliness I am very much on a par with other people, and thrusting my hand into my favourite mug to fish out a crisp packet only to find a used condom lurking at the bottom was not something I was thrilled about experiencing.

Anyway, it was not until the following year, when I was living in the same house with 2 girls and 1 boy, all impeccably clean people, when we got the rats.  My housemate, let’s call her Goose, thought that she’d seen a mouse one day in her room.  She didn’t leave any food in her room and she was the cleanest of us all, so it was very surprising.  We had all, also, heard a lot of scratching during the night, as if something was in the walls.  Reasoning that it couldn't have been anything too big or scary, we didn’t think too much more of it, until we woke up one morning to find that a box of mince pies had been eaten into, and one of the pies, foil case and all, had been utterly devoured.  The others remained largely intact, apart from having been nibbled around the edges. 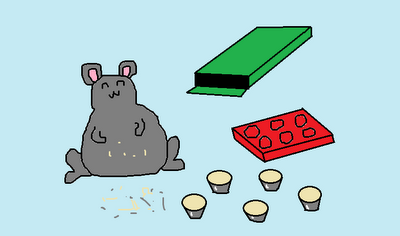 At this point, we decided to call a pest man, who informed us that we didn’t have mice, but actually baby rats.  They had somehow crawled up through the pipes into the roof, and down to our ground level flat through a couple of holes in our wooden floor.  The rats had also managed to chew their way through Goose’s floor one night and eat all of her biology notes for the semester, and half of her yoga mat.  After this incident she erected a rat-guard in her room, consisting of an upturned plastic box with several heavy books piled on top.  Now I love rats, and think they make wonderful pets, but unfortunately the wild ones carry diseases and it would have been impossible for us to share our house with them: 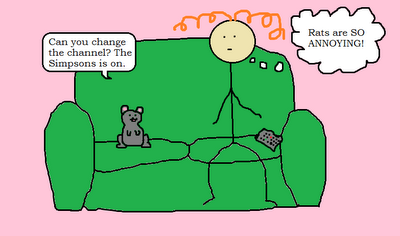 When the exterminator came, he brought with him a huge tub of rat poison, telling us that it would not only kill the rats, but make them thirsty first, so that they would leave the house to find water before they died.  This was good in that we wouldn’t be living just above dozens of rat carcasses.  He found the hole that the creatures were coming through, and approached it with the tub of poison.  It was very funny when he poured it down the hole, because we kept thinking that he’d stopped, only to pause and pour a bit more in.  He ended up pouring almost the entire tub down the hole.  They'd never have survived that, but I'd often imagined that they had somehow got wise to the poison, escaped and are now living freely out in the countryside somewhere.