China: The one where I was literally allergic to an entire country

I was allergic to China.  At first when we arrived I was just insanely jetlagged, which is hardly the country's fault.  It was 6am when we landed, and apart from a few people getting a bit of a nap, none of us really slept on the flight so we’d been awake for 20 hours or so already.  In our minds it was time to be dropping off, so when we eventually arrived in our hotel at 8am or so, and had breakfast simply, to misquote the explorer Mallory; “because it was there,” none of us were quite with it.  The fact that the breakfast consisted solely of what we understood to be evening food confused us further, and it was a miracle I didn’t faint when I finally caught sight of my amazing bed.  Instead, being gluttons for punishment, we put on all of our woollies and headed to Tiananmen square where we were filmed by a group of Chinese students wanting to practice their English.

On no sleep, this entire episode was deeply, deeply bizarre, made more so by the cloud of pollution that loomed ominously over the city. 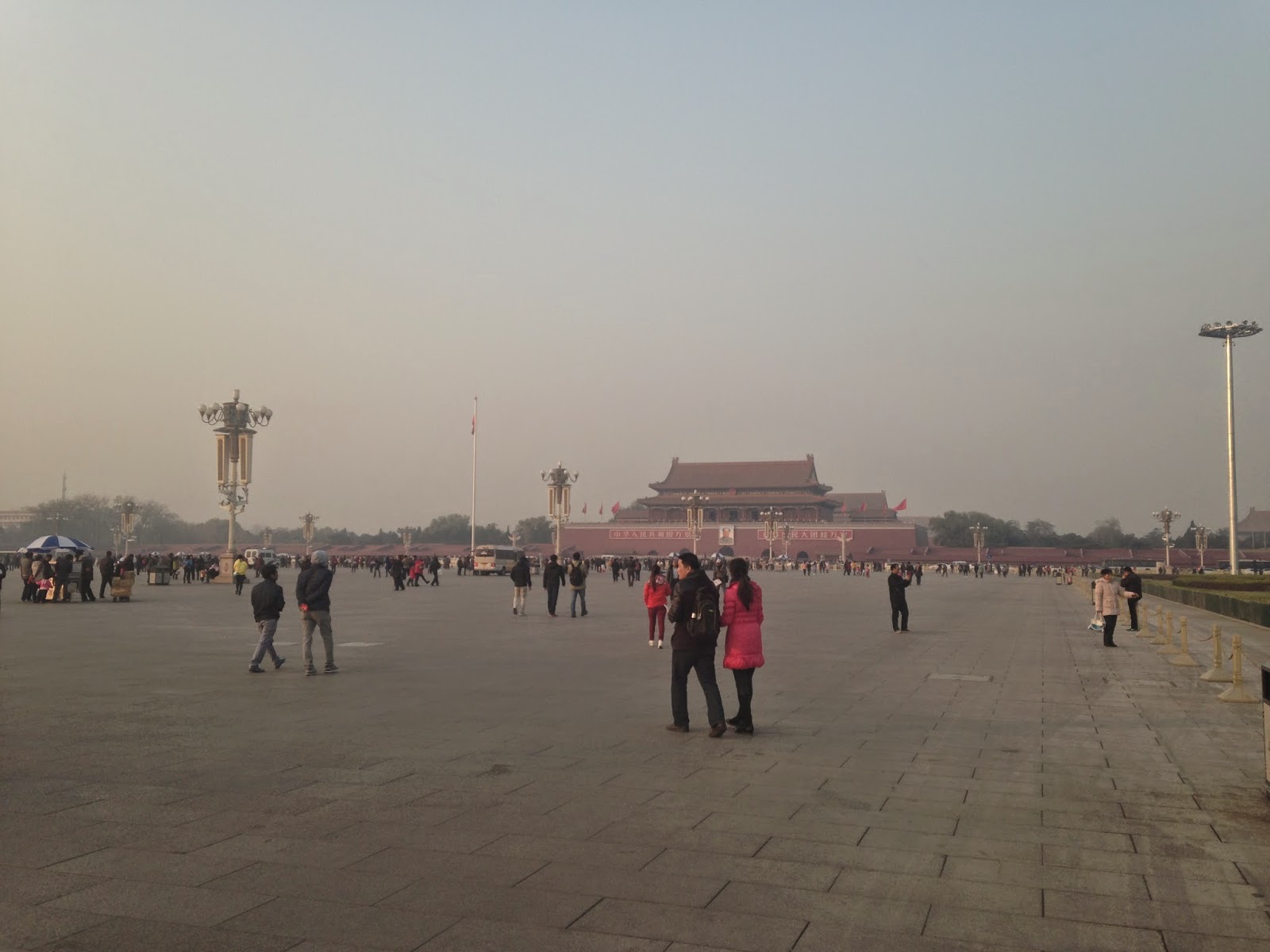 Of course, then the cold started.

I’d, like an IDIOT, managed to forget to bring paracetamol and lemsip and all my various medical gubbins over with me from Europe, and I didn’t understand anything in the chemist.  Of course, if you were after birth control they sold the equivalent of morning after pills over the counter for £4.50 but simple, normal medicine was very confusing to find and I was too nervous to mime anything, like that time in Germany three years prior when I was worried I was pregnant and hadn't yet learnt any of the language; I ended up miming a pregnant belly followed by a helpless shrug to a staff-member and they seemed to understand me.  Of course, it turned out that I was under a lot of stress and my body had helpfully decided that, to make me less stressed, it would stop my periods and make me even more stressed.  *SIGH.* TL,DR; I'M NOT PREGNANT, SO STOP PANICKING.

Anyway, it was one of the nastiest colds I’d had in a while, and throughout my first week of China performances almost every one of my lines would have been punctuated by a loud sniff, and at one point I actually saw a drip of my nose mucus fall onto Polonius but I subtly found a reason to touch him and wipe it off before he noticed.  He will never know! BWA HA HA HA HA HA-oh.

A trip to the great wall of China and sliding down in a toboggan (possibly definitely in the same toboggan once ridden by Michelle Obama!) cured literally every ill in my body, however, and we were excited to move south and explore different parts of the country.

During the first week we also started having these really messed up dreams about each other.  Due to the weird sleep patterns and, quite frankly, bizarre activities we were getting up to, even my mental dreams were crazier than usual.  One in particular stood out.  All of us apart from Horatio were out at a lovely restaurant in dresses and tuxedos partaking of champagne and incredibly sophisticated conversation.  Suddenly, Horatio walked in, dressed head to foot in a hot dog costume.  He looked embarrassed for a moment, before his face turned into a scowl, and he said angrily: 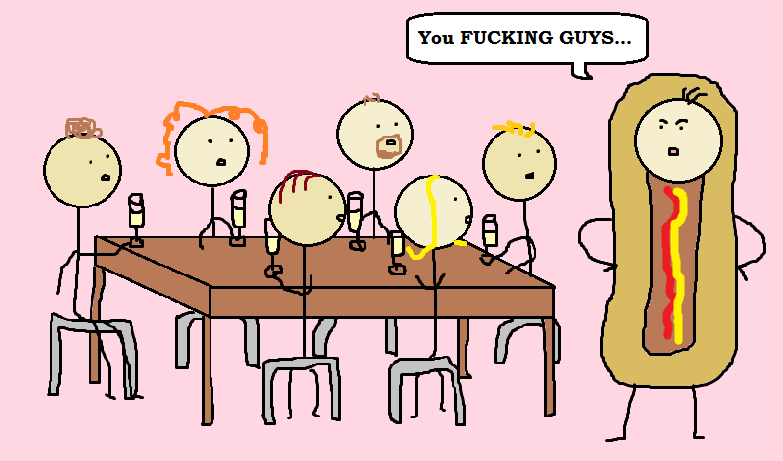 And walked stiffly out, slamming the restaurant door behind him.

That was when we all started throwing up.

It wasn’t quite simultaneous; that would have actually been pretty cool, apart from the fact that when an entire company of actors IS actually throwing up constantly, it’s surprisingly not that funny, as happened in one of Horatio’s previous casts with this company: 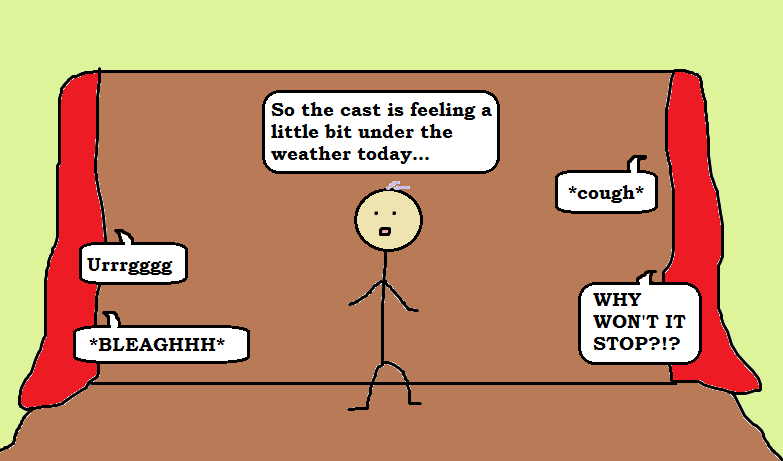 Laertes was the first to go, unable to sleep during the night before we left Beijing.  Gertrude swiftly followed.

Now I am the first to admit that I am somewhat of a hypochondriac, to the extent that my mother used to hide our family's medical encyclopedia so that I wouldn’t learn anymore names to diseases. 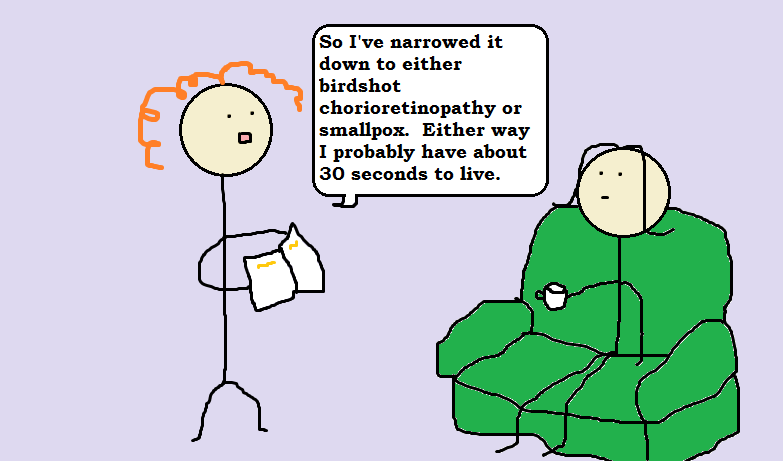 However if Ben Goldacre has taught me nothing else, (he’s actually taught me a great deal, but that’s another story,) it’s that psychological illness can be just as real and threatening as so called ‘real’ illness, so, once Laertes and Gertrude were throwing up every night and spending the whole day gaunt and pale next to a bucket, I started to feel sick too.  “It’s just psychological.” I kept telling myself.

On the third night after Laertes got sick, however, I was lying in bed with stomach cramps, unable to sleep, for a good many hours.  Eventually I gave in and threw up everything in my tummy, but, alas, there was not much in there, so I spent a solid two hours running back and forth between the toilet, my poor stomach retching and retching trying to rid itself of the emptiness that lay within.  “There’s nothing left!” I wept to my body, “why can’t you understand that?” This all fell on deaf ears.

By this time, Laertes and Gertrude were better, and the show the next day was fine.

It was the following day where I was an UTTER FOOL.  Because I felt better, I naturally bought and consumed almost an entire tube of sour cream and onion Pringles, because why wouldn’t I? My tummy was still a bit achey, but the show went fine.  At least most of it did.  It was in one of my mad scenes, when I had to yell and punch a coat (you had to be there) and then fall to the floor, that I realised I was going to be sick.  It was there, in front of an audience of several hundred people, all looking at me, that I had to make the quickest executive decision regarding vomit I will probably ever have to make in my life.

“I have three options.” I thought to myself.  “Obviously the easiest would be to just throw up.  They may think it’s part of the play.  However there is a sword fight later and I don’t want Hamlet or Laertes to die in real life due to slipping and ending up impaled on a sword in a pool of my vomit.  There are surely better ways to go.  The other option is that I run off stage and throw up, but I don’t know if the people who have lines next are ready to come on and I know there’s some music in a bit and also I would worry people and I don’t want to worry people…”

These thoughts occurred in the space of one second.  It was becoming rapidly clear to me that I had to do something.

“The third option is that I say all the lines as quickly as possible and walk off stage without upsetting my stomach further.”

At the time, this seemed to be my only option.  My colleagues must have thought I had gone absolutely dotty because my next set of lines which I usually made last for a minute I squished into about five seconds flat before wandering oddly from the stage. 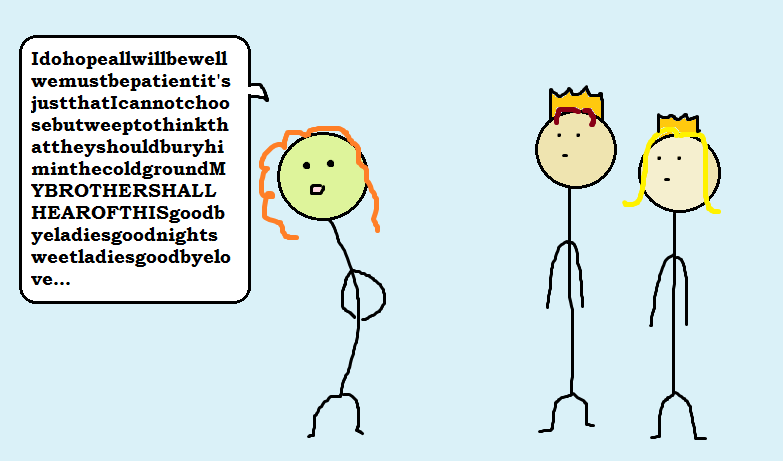 I then looked from side to side in a panic before running to the mercifully close toilets and evacuating the contents of my stomach into one of them.  I came on stage one minute later again as if nothing had happened.

The next few days were un-eventful, until Hamlet got sick too.  Polonius, Claudius and Horatio avoided the whole thing, which I think means there is some plot afoot.  Gertrude’s theory is that it was something on the pitch pipe, but we will never know.

The days were uneventful, of course, apart from the ridiculously eventful day which immediately followed.  I was feeling okay, but a little gassy.  Not being one to hold in my farts, (which will definitely be the opening line of my epitaph,) I let one out about 10 seconds before five of us were about to gaily caper on for the Players’ scene in Act I.  Alas for me, for this wasn’t a fart at all.  My face drained itself of all colour and expression.  Claudius stood next to me.  I simply whispered: 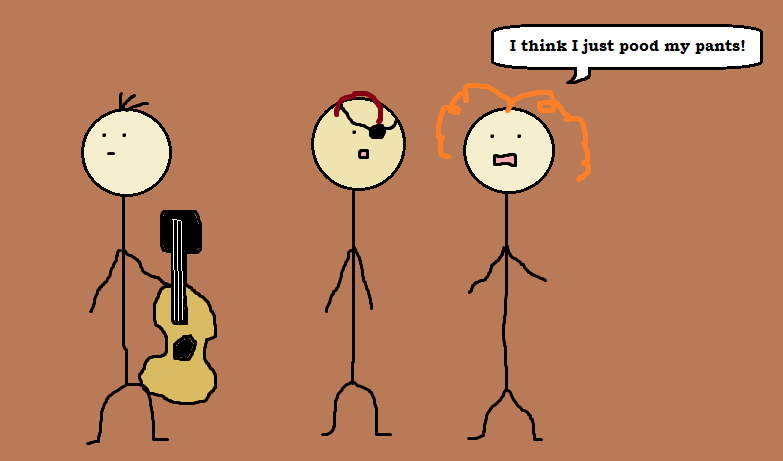 Before we had to start singing and dancing onto the stage. 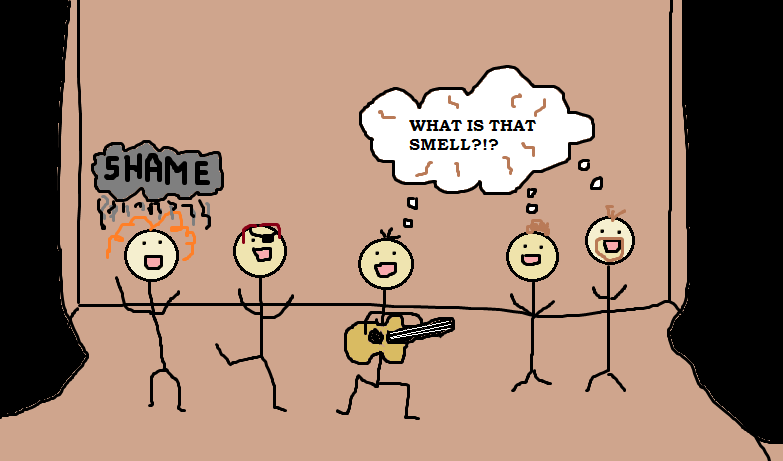 I got several doubtful looks from Gertrude throughout the scene because of the smell, and Claudius was unable to keep a straight face.  I simply hung my head like an embarrassed dog and continued the scene with a hilariously awkward gait, trying not to allow the mess to spread.  Offstage I stripped my entire bottom half off and used baby wipes, scrunching up all my dirty clothes and putting them in a plastic bag to be taken home like some disgraced school child, all under the watchful eyes of the bemused fire officers. I had to do the entire rest of the play completely commando, and extremely ashamed of myself.

Later on that evening, Hamlet came by my room to give me some of his special tea for bad tummies, and I greeted him with a cheery: 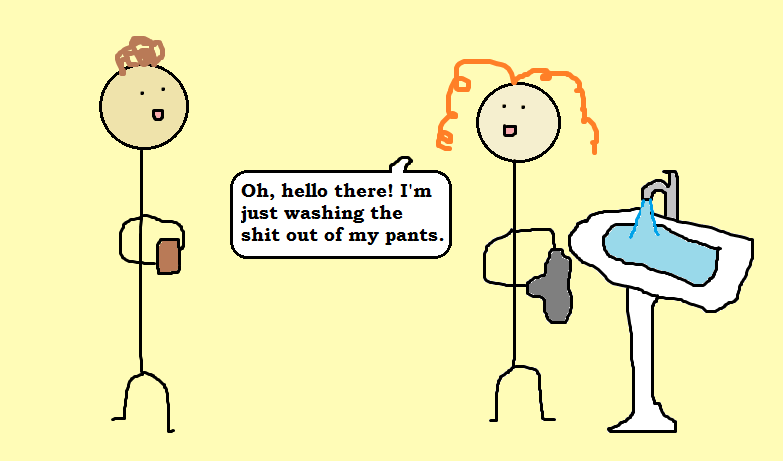 I hope that a lot of potential employers reading this will take this as proof of my absolute sheer professionalism, and I never even mentioned the time when I started my period over one of my dresses and had to wash it in a sink in the interval.