A good way of finding out what kind of person somebody is, is by asking them which Hogwarts house they would be in.

Which Hogwarts house would I be in?

You might belong in Gryffindor,
Where dwell the brave at heart,
Their daring, nerve and chivalry
Set Gryffindors apart

This one is very easy.  I would definitely not end up in Gryffindor because I do not possess even the slightest shred of bravery or chivalry; my fears include wet clothes, unusual showers, and abandoned swimming pools.  Let’s just say that if you were in a group that required one person to make a noble sacrifice, that person would certainly not be me: 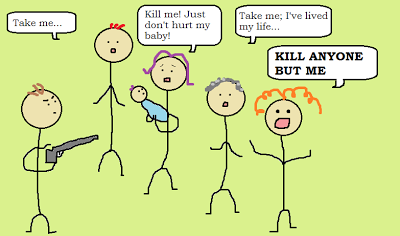 In any case, I have no desire to be in Gryffindor; many of the people in it seem to be a trifle ‘up themselves’ and are usually the ones who end up in awkward situations, like fighting Voldemort or getting detention.  There also seems to be, in this house, a strong disregard for the rules, and I am terrified of disobeying rules, often to the point of ridiculousness: 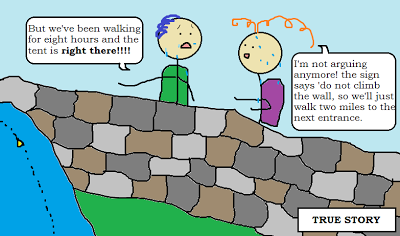 Gryffindor is not the house for me; that is for sure.

Or perhaps in Slytherin,
You’ll make your real friends,
Those cunning folk use any means
To achieve their ends.

When I first read Harry Potter I went through a weird depressive phase of being a little misunderstood; laziness prevented me from going full emo but I did lust after the Slytherin house, wondering if that was where I belonged most of all.  Interestingly enough, THIS QUIZ agrees with me.

As a child I suffered with crippling guilt whenever I did anything wrong, both at home and at school.  Whenever I go into a vaguely negative space I think of all the things I did wrong as a child and eventually I feel as if I’m drowning in an ocean of guilt, which feels a lot like molasses in consistency.  As a result of growing up like this, I became extremely good at getting myself out of trouble; I don’t ever outright lie, but I can very easily manipulate myself out of trouble, and can burst into sympathy-inducing tears in moments if I need to.  Of course, I’m rarely in control of these tears, but I think, somewhere in my brain, there is a little ‘me’ who is doing them on purpose in an attempt to stop people shouting at me or blaming things on me that were absolutely my fault.  Perhaps, because of this, I would be put in Slytherin.  They are sly and seemingly emotionally intelligent individuals who can talk their way into opportunity and out of trouble. 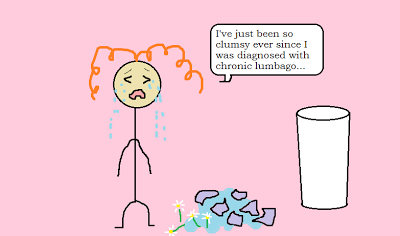 On the other hand, Slytherins are ambitious, and I, alas, am not.  I have a vague dream of acting and singing and getting my novels published, but if I was offered a job that involved me sitting around all day in my pyjamas and playing with puppies in exchange for a place to live and some money to buy sweets, I’d probably take it.

The people in Slytherin all seem to have this negative, even evil, edge to them, and that is not something I want to be around.  I have a manipulative side, but I want to grow out of it; I don’t want it nurtured and encouraged; absolutely not! Besides, their common room is dark and dingy and would send my seasonal affective disorder-ridden self into chaos and depression.  If I wanted to become more ambitious, I’d just go on the UK Apprentice instead; at least there you get a nice house.

Or yet in wise old Ravenclaw,
If you’ve a ready mind,
Where those of wit and learning
Will always find their kind.

I don’t want to toot my own horn here, but I am pretty brainy when I want to be.  Although I can ask stupid questions sometimes (Why is it warm at night when the sun has gone down?) I do so because I have a very inquisitive mind and love learning and spouting facts at people.  I’m also a great fan of logic puzzles and can solve Rubik cubes in less than two minutes.  It seems quite likely that I’d end up in Ravenclaw, to be honest, and blue is most definitely my colour.

On the other hand, my brain often gets me in to trouble; I sometimes say things in a very cold academic way with the intent to explain myself afterwards, but if people only hear the first part and don’t listen to the second, it can come across as horribly offensive and gives them a very nasty impression of me.  I don’t need to be in a place where I’ll be encouraged to speak in an academic style and have to use flowery, useless language in order to explain anything.  I don’t need this part of myself brought out anymore.

The people of Ravenclaw don’t seem nearly as exuberant as people in the other houses and are, to be honest, a little boring.  I also know, from experiencing 'world-class' universities, that the worst thing for intelligent people is to bundle them together with other intelligent people for the sole reason that they are all terribly clever, and let them live that way for several years.  I feel this puts an enormous amount of pressure on the students and would create a needlessly competitive environment in Ravenclaw.  It also seems ridiculous to assign children of eleven to this house when their intellectual capabilities have not yet had time to develop.  I was a bit of a doofus until I was 16, when I discovered the subjects that interested me the most at school.  No; Ravenclaw is certainly not the house for me.

You might belong in Hufflepuff,
Where they are just and loyal,
Those patient Hufflepuffs are true,
And unafraid of toil

People inside and outside of the Harry Potter novels mock those who end up in Hufflepuff.  It’s seen as the ‘loser’ house, where you go if you don’t excel in bravery, ambition, or intelligence.  It also seems to be the house that least describes who I am: I am stubborn and strong, if a little shy, and can be bitchy and manipulative at times, and I can be too clever for my own good; I'd have to argue my case pretty hard not to be put in one of the other three: 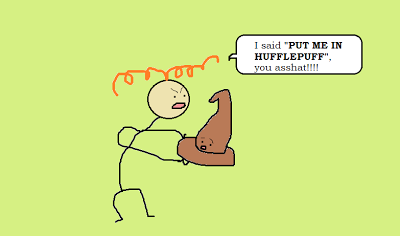 Hufflepuff, however, with its simple values and kind heart, is exactly the environment I’d want to spend seven years in, and it would undoubtedly be very good for me.  I can practice sport, write my books and solve my Rubik cubes as much as I like, but when it comes to who I want to spend my time with, I want to be with the people I most want to be; loyal, kind, hard-working people, who, perhaps lack in ambition, but who make up for it with positivity and spirit.  That’s what I think of when I see the name ‘Hufflepuff’- a house lacking in many things, but rich when it comes to what really matters.  They're also right next to the school kitchens.

As Dumbledore says, it’s our choices that make us who we really are, and it matters not what I am, but who I want to be. Of all the houses in Hogwarts, Hufflepuff is the only one without any negativity attached to it; no Gryffindor pride, Ravenclaw coldness or Slytherin manipulativeness; just pure and utter sunshine.  And badgers.
Let's face it; If one of the Hogwarts houses was going to host a wicked party with killer food and games, it’d be Hufflepuff.  I'm THERE. 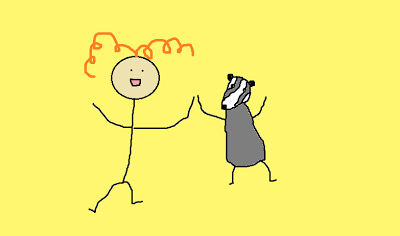