That Bloody Shambles of a Gorilla

You may not have noticed, but this blog was started exactly a year ago today! I have marked this occasion with a new layout and header, and a rant about an animal playing a musical instrument.

While writing my post about America I mentioned my hatred for the stupid Dairy Milk ad with a gorilla in it.  Part of what makes me hate it is how people tend to react to it. 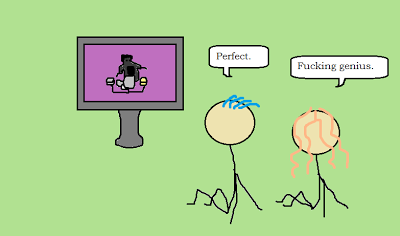 It’s not “genius!” Einstein was a genius! Thom Yorke is a genius! The person who invented cheese is a genius! Is this what society has come to? I’m not a snob; I can be entertained for literally hours watching videos of cats falling into baths.  I do, however, see things for what they are, and this is an advert.  Its sole purpose is to make money.  It annoys me that this particular ad is seen as a thoughtful and inspirational piece of art instead of a cleverly designed tool to sell hipsters more chocolate.

I’m not against adverts; in fact, I’ve been in quite a few internet ads myself and would quite happily throw my pescatarian principles out of the window if McDonalds paid me £20,000 to take a bite out of a hamburger.  Ads are fun, and there have been some great ones; my particular favourite is the Guinness ad where the fish rides the bicycle, and I have noticed the irony of both my favourite and least favourite adverts involving animals doing things that they have absolutely no business doing.  I was uncertain on beginning this paragraph exactly why it is that I hate one and love the other, but hopefully by the end of this sentence I will have figured it out; it seems to me to be to do with honesty.

Guinness’s adverts probably could be described as works of art, because they are incredibly detailed and well-thought out. The one about the fish is actually very mildly offensive to women- and probably fish- but it’s so funny I don’t really care.  I’m not sure exactly what a fish riding a bike has to do with ‘Guinness Extra Cold’ (the fish does seem pretty cold), in the same way that a gorilla drumming has nothing to do with Cadburys chocolate, but it seems like Guinness have worked hard to create something extremely light-hearted, silly and entertaining and, if I liked Guinness, (which I don’t,) I would definitely buy their beer.

When I watch the Gorilla ad, however, I don’t feel that same warmth I do when I watch Guinness ads; it’s partly because I see it as being very aware of itself and how inspirational its meant to be, coming across as incredibly pretentious and heavy-handed, and partly because it lacks the honesty of other adverts.  The screen at the beginning says “glass and a half full productions”, suggesting that they see themselves as an actual artistic film production company rather than people who make and sell chocolate.  It’s designed to be entertaining and to make people associate the Cadburys brand with happiness, but when I watch it I just feel a bit cheated.  All adverts are trying to sell me things, and that is fine.  However, Cadburys seems to be going out of its way to appear not to be selling me something, and I find this weirdly manipulative.

I am, admittedly, a trifle oversensitive and may be reading much more into Cadbury’s intentions than is necessary, but I don’t like feeling tricked or easily led.  I’d rather be fully aware of being manipulated; then at least everyone knows where they stand.  Cadbury seem to be declaring, with this campaign, that they are ‘different’ from other companies, when there is nothing remotely different about them when it comes to their desire to keep their business commercially viable.

Let me go a bit further:

Another reason why people think the ad’s wonderful is that it’s sparked so many comments from people wondering what the hell is going on, which starts a discussion, which spreads the video around further.  “It’s making people think,” says someone on the internet.

I’m confused.  I think it’s actually a downright dangerous idea to allow people to merely associate something randomly happy with your product; it’s easy and lazy.  It’s not genuine advertising; it’s propaganda; HAPPINESS = CADBURYS DAIRY MILK.  I’m not going to go as far as compare Cadburys to Hitler, but this quest to simply ‘make people smile’ without any context has a slightly disturbing edge to it.

What freaks me out is that this can be done with anything: 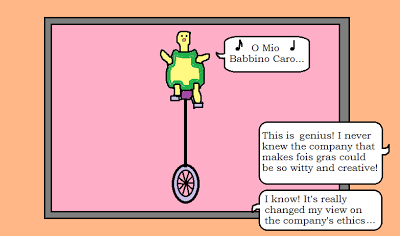