These stories involve people actively insulting me for trying to do my job.  Typically, I was called a 'bitch'.  This makes me wonder- what on earth would a man in the same situation be called? 'Bitch' seemed to be everyone's default insult towards a female bartender, and that goes for the women as well.  On a side note, I realise that a lot of what I said in these conversations could have been read as sarcastic.  even though I do like to use sarcasm, I would always be very polite to customers and even when I was humouring them I would always do so with an utterly genuine tone and facial expression.  I felt like this got them angrier and angrier, which made me laugh (inside).

The boy who was too honest for his own good

This is one of the stupidest situations I was ever in behind a bar.  A young-looking boy came up and asked for a pint.

“Could I see some ID please?” I asked.
“Oh, sure.” The boy said nonchalantly.  He reached into his pocket and brought out his passport.  When I read his date of birth, he was revealed to be only 17; two weeks shy of his 18th birthday.

“Uh…this says you’re 17.” I said with a smile.  “I’m afraid I can’t serve you.”
“But…I’m almost 18.” The boy whined.
“I’m sorry.” I said sympathetically, “I know it’s ridiculous that two weeks should make a difference, but a line has to be drawn somewhere.”

At that point, a portly man in his forties chipped in.

There was a pause while the man considered his next argument.

“Have a heart.” He said, giving me another wink for good measure.

“I wish I could.” I shrugged, apologised, and moved onto my next customer.

“Don’t worry,” I heard the man say to the boy, “In two weeks you’ll be able to drink, but she’ll still be an uptight bitch.”

Not wanting to seem ‘uptight’, I flashed him a bright, genuine smile, then returned to work.  As much as I hated him, I rather admired his turn of phrase at the end there.

The boy who forgot his sporran.

Another age-related mishap took place when I was working at a free wedding bar.  Even though one may not expect this at a wedding, it was being held in a public building, so I still had to ask for IDs when I thought people were underage.  One particular boy looked as if he might be 18, but I had to be sure.

There was an awkward pause.

“I’m afraid until I see it I can’t serve you anything, but if you find it I’ll be happy to serve you.”

There was another pause, and his face contorted with rage.

“WHAT?!?” He yelled.  “This is FUCKING RIDICULOUS! I have to go back to the hotel for my ID? I’m FUCKING nineteen! NINETEEN!”

“I believe you, sir,” I said gently, “unfortunately it’s the law; I have to see some ID.”

“GOD!” He said, exasperated, and stormed off.  Twenty minutes later, he was back, and brandished his passport practically in my face. 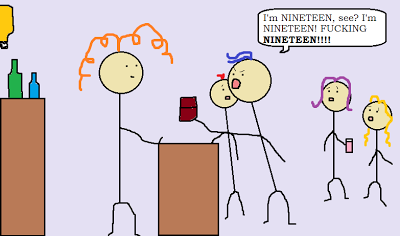 I put on my best smile, and said:

He put the passport back in his pocket and realised, sheepishly, that everyone in the bar area had been staring at him. 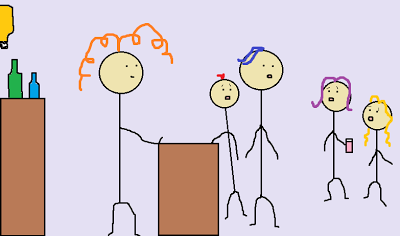 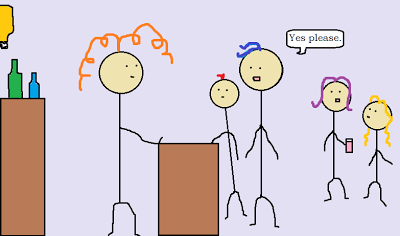 The girl who liked tonic

Girl: “Could I have a Bombay Sapphire please?”
Me: “Of course; would you like that just on ice?”
Girl- “Yes please.”

I make her drink in about eight seconds, and bring it back to her with the price.  Her previously polite façade dropped, leaving a very ugly expression.

Another eight seconds later, I had her modified drink ready.

“I mean, it’s a gin,” the girl said rudely while handing over her money.  “Of course I wanted it with tonic.”
“Of course.” I smiled.


“Bitch.” She muttered, moving away.

The man who hated waste

I misheard a boy’s drink order and he realised it was wrong when it arrived.  This was a loud bar and such things are very easily done.
“Oh I’m sorry,” I said, “Let me just get you another.”

About ten seconds later, I was back with his drink.

There was a slight pause while I looked directly into his eyes.

The man who thought the mats were out to get him

The final story is the only one which made me snap and lose my patience.  I feel embarrassed about it now and would act very differently if such a thing happened again, but we're all young once.  Perhaps I did the right thing after all.  One evening I was working an incredibly busy, informal and trendy bar, and I’d just served a very sweet, polite man a pint of beer.  I was just about to move onto the next customer when he accidentally placed his beer half on and half off a rubber grill mat designed to catch excess liquid, and it overbalanced, spilling everywhere.

“Oh no!” He said, laughing at himself.
“Oh I’m sorry, that sucks.” I laughed with him.  “Would you like another one?”
“Only if it’s free.” He joked (well, I thought he was joking.)
“Sorry; I wish I could, but I’m not allowed to give away drinks for free.”
“But it was this mat’s fault, it shouldn’t have been there.”

He glared at the mat and kind of awkwardly flicked it in anger.  I was amused for a moment at the thought that the mat had somehow developed consciousness and wanted to inconvenience a stranger.

“Unless it was me who spilt it, I really can’t give you a new one.” I explained, still very politely.  “I really am sorry; I wish I could give you one for free, but I could be fired.”

The, previously polite, man was suddenly looking not quite so friendly.

“I just can’t understand why you won’t pour me one.” He said angrily.  “I didn’t even get to drink any of it.”
“As I said, I understand and I sympathise, but I can’t give you a free drink.”

There was another pause, and he looked at me with interest.

I tried to respond jovially, giving him the benefit of the doubt; he could have just had a very odd sense of humour.

“With respect, you getting one free beer is not worth me losing my job.”
“Well I think it is.”

When I was a bit younger, I suffered with such a severe stammer that I’d find it almost impossible to speak when I was nervous or under pressure.  I’d mostly grown out of it, but owing to the fact that I’d just been called an evil bitch, I became quite nervous and began to stammer again.

The man was amused by my speech impediment, and, over the next few seconds, his face changed into an expression designed to imply that I was mentally handicapped somehow; he pushed his tongue against the inside of his chin, crossed his eyes, and mimicked my voice in a pretty disgustingly offensive way.

I narrowed my eyes for a moment, seeing in my peripheral vision the shocked and horrified faces of the customers standing on either side of him.  I then did something I never dreamed I would do in a customer service position: 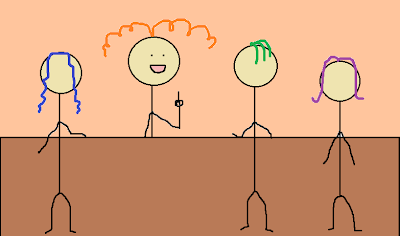 I subsequently ignored him and moved onto the girl standing next to him, who was very polite to me, and gave me a pound as a tip (even though I never got tips.)  After serving all the people on the bar I told the manager what had happened, and she got him thrown out of the bar!  She was awesome.
Posted by The Singing Duck at 07:24