They say that to pass your driving test you should have one hour’s worth of driving lessons for every year of your life; if this were true, I would literally be about 250 years old.  I like to think that I am good at driving and say so at every opportunity:

And they look at me with confusion.  You see, I suffer with a crippling anxiety that only makes itself known during driving tests, (and when I try to do scales on the piano a 6th apart).  I have taken four driving tests, and failed all four.  In one of those tests I received nine major faults and the examiner, genuinely worried about my mental health, stopped the test in the middle and had to calm me down as I hysterically cried.  I also cried in my last test because I stalled on a dual carriageway with a lorry behind me, but it was a marked improvement.

I also seem to be plagued by incredibly bad luck in my tests; in my first one I turned tentatively round a corner to be faced with a horse galloping straight towards me.  In my test last week somebody reversed out of a driveway at about 90 mph without looking.  I dealt with both of these situations very well, (though I did yell ‘SHIIIIIIIT!’ in the last one- thankfully my examiner laughed.) it’s only on stupid, annoying mistakes that I’d normally never make that I fail on.

Being put in a situation where I have to drive while bring judged by a complete stranger is so artificial and thus so terrifying to me, that, would I to feel that anxious in real life, I would not dream of getting in a car and driving: 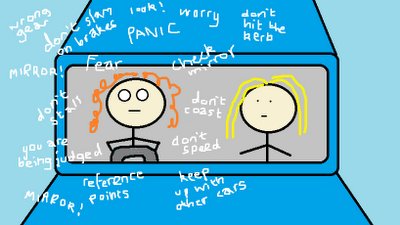 My recent lessons were going all right, but I found myself distracted by the fact that my instructor kept saying ‘myself’ and ‘yourself’ when she meant ‘me’ and ‘you,’  so I failed for the fourth time a few days ago.

I think that all cars should actually be abolished entirely; it would cause millions of people extreme inconvenience but it would make me feel slightly less of a failure every time I see a car. 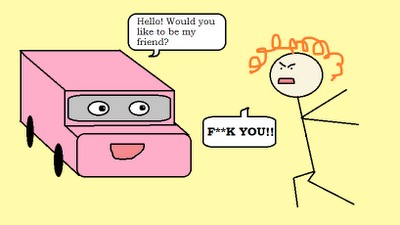