Perhaps a good place to start would be with the one thing that I feel affected my life more than anything else.

You may not have seen or read Watership Down, but if you haven’t, I urge you to do so.  You should not, however, show it to your children.  I made the mistake of watching this film when I was seven years old, and I’m not exaggerating when I say that it scarred me for life, and, according to a lot of reviews on amazon.co.uk, I am by no means alone.

The film/book follows a group of wild rabbits as they make their way to Watership Down, a presumed utopia as prophesised by the youngest rabbit, Fiver.  The film has a ‘U’ certificate meaning ‘suitable for all’, and from the blurb, one would merely assume that this film was a simple cartoon about bunnies on a journey.  This is what I imagined before I saw Watership Down: 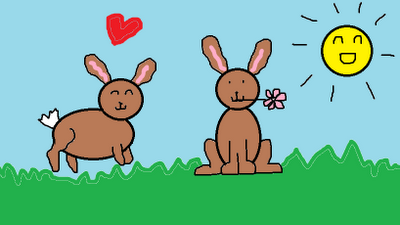 The content of this film is simply horrific; rabbits getting caught in snares and coughing up blood while the others look on in horror, rabbits getting their throats torn out by other rabbits, being ripped apart and thrown around by dogs, and being crushed in their warrens as they are filled in with earth.  It is not so much the content, however, that really got to me.  It was the psychedelic and dark techniques used in the film; dozens of rabbits with terrified, red, eyes crawling and scraping their way through the ground only to be suffocated and crushed, accompanied by whiney, discordant music and the voices of the one survivor; “we couldn’t get out!” ringing in the background, the hurried, frantic music accompanying the snared rabbit coughing up blood and raggedly breathing as it is slowly strangled.  No film I have ever seen has quite captured pain and suffering in the way this film did for me.

(to get a general feel of the horror, I recommend parts 4 and 5 here:  http://www.youtube.com/watch?v=f_HqTm7sEcU)

Of course, this is a great compliment for a film; I’d actually recommend that everyone goes ahead and watches it.  (It’s all there on youtube) But please, for the love of God, do not show this film to your children!!!!

As a result of this film, I did not sleep properly for five years.  For the first few weeks I lay awake, eyes wide open, knowing that if I closed them I’d be faced with all the visions of the rabbits that I was trying not to think about.  After a while, I gave up trying to sleep altogether, and would stay up all night reading and writing and drawing, until I could finally go in and sleep with my parents at 6am (as was their rule) where I would get a precious hour or so of sleep until we had to get up.  I’m not sure how I survived childhood on less than an hour’s sleep every night but it probably accounts for all the mental health and sleeping problems I have today.  It also, however, sparked off my desire to read and write and draw and be generally creative, so huzzah!
Posted by The Singing Duck at 05:13