I have been in America for three weeks now, but now that I'm randomly in Toronto, I've decided to sum up what I've noticed about America that differs from the country of my birth.  Most of them are things that get my goat, quite literally. 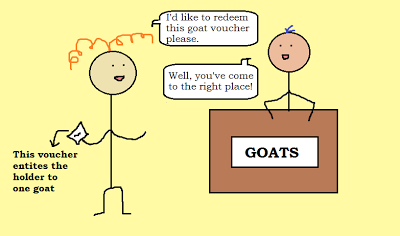 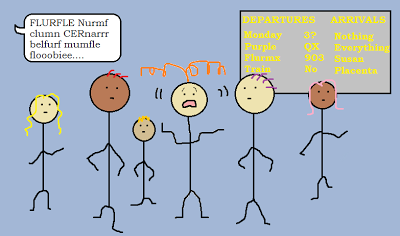 Whereas, in Britain, we are known for our very clear announcements, like on trains, for example, every announcement I have heard in America sounds like it’s being spoken through a mouthful of cotton wool.  In Britain you get helpful things like- “Passengers waiting at platform 6 should move to platform 3 for the 8:37 Central train service to London Euston.” In America, along with a departure board that makes no sense (at least to me), you get something like- “Murfle-mufle-murfle-murfle-flurmble-frumfum” after which everyone on the station concourse charges at you and knocks you over.  How they managed to hear what was said completely escapes me.  At Disney World, I was standing literally three feet away from the man giving an announcement (presumably about keeping one’s limbs inside the teacups) and I still didn’t catch a word of what he said.  Americans usually speak, if anything, with more diction than a lot of British people, but as soon as you put an announcing microphone in their hands the muscles in their mouths seem to melt.

Why do Americans love their country so much? I mean, it’s a nice place, but they seem to care much more about it than I care about Britain.  Perhaps it’s because my country used to own a third of the world and now we don’t, so our lives are built around a vague feeling of loss that can be alleviated only through apathy and self-deprecating humour.  America is a brand new country where children are taught they can be anything they want to be if they just work hard enough.  This is good, in a sense, but I’d much rather live in a place where people are a bit lazier and don’t put so much pressure on each other.  I like Britain, but, being British, I like moaning about things, so it's good to be around a lot of things I can complain about.

I used to think it didn’t rain in America; not because I’m an idiot and don’t understand meteorology, but because whenever you see Americans in Britain when it starts to rain, it looks like they’ve never seen this strange weather condition before.  Having lived on the East coast of Scotland for five years, I am perfectly happy walking for ten minutes in the pouring rain only to sit in a warm lecture room full of musty-smelling students, then wading home through a knee-high flood to get to my front door.  This is also good because it gives me something to complain about, which, as I stated above, British people like to do.  This being the case, experiencing a touch of drizzle is of absolutely no concern to me; I don’t even own an umbrella.  Whenever it begins to rain in America, however, what transpires could only be described as sheer panic.

When I was younger I went to the Tower of London so see some of my favourite old Kings, and it began to rain.  While my companion and I carried on walking around as if nothing had happened, the Americans were literally running around and trying to gather their families together to shelter under doorways, hurriedly putting on ponchos they’d bought for £4.99. One particularly frightened man appeared, charging into the room wearing a poncho and carrying a walkie-talkie: 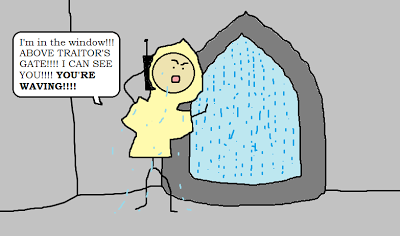 There was quite a bit of rain in New Haven for Foofy's graduation, and I probably heard more conversations about ponchos and umbrellas than about how proud people were to see their children graduate.  I don't know if Americans are more paranoid about hair and clothes getting wet than the British or if they are actually, somehow, allergic to water.

British people enjoy queuing correctly; I must confess I get a little buzz from seeing a neatly organised line of people.  I admit, however, that queuing can sometimes get out of hand; once, for example, I joined a queue and stood in it for several minutes before I realised there was nothing at the end of it; a wild queue had simply appeared.  Americans have developed a very primitive form of queuing (even though they call them ‘lines’ and there is no verb you can use to describe the action of being in one) but often their ‘lines’ degenerate into people just pushing each other to get to the front, which is part of the reason the person in my last post upset me so much.  As Arthur Dent says, “I’m British; I KNOW how to queue.”

It can be very warm in America so air conditioning is important, but I spent three hours freezing cold in an airport because our plane was delayed and the air conditioning was on full blast.  Everyone else was just wearing a t shirt or short-sleeved shirt and I stupidly put all my extra clothes in my checked luggage, so I spent a long time being very uncomfortable.  Americans seemed to like being frozen, but I didn’t enjoy it one bit.  Their obsession with air conditioning leaves the country with them; one time when I was younger I was on a bus in Munich heading to Dachau Concentration Camp for a tour.  The mood on the bus was sober in preparation of arriving at our destination, where many, many people had lost their lives.  I was shocked when this occurred with a middle-aged American couple: 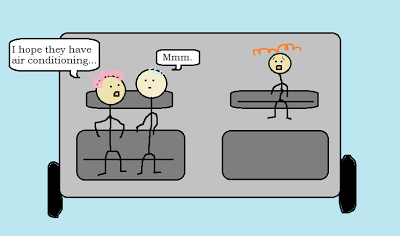 6.   Advert breaks and the adverts themselves

Why is there an advert break every five minutes?!? I cannot watch TV in America because it’s impossible to focus on it.  Television is supposed to be designed so that people will keep watching it, not turn off in anger.  The adverts themselves are also poorly made, on the whole; they are rarely witty, thoughtful and interesting, and regularly garbled and rushed in an attempt to mention the product as many times as possible.  Not that I like British adverts any better, especially the ones that are meant to be ‘brilliant’, like that INFURIATING Dairy Milk ad with the gorilla on a drum kit.

I don’t understand why Americans call their toilets ‘restrooms.’  You’re not resting in there; at least, you shouldn’t be, because people will be waiting to use them.  Alternatives include the ‘Ladies Room’ or the ‘Bathroom,’ which I also don’t understand.  Americans always accuse British people of being uptight and prudish, yet you find it impolite to use the word ‘toilet?’ When I first went to America at the age of 18, I accidentally asked where the ‘toilet’ was and I was met with a mixture of horror and confusion behind a mask of politeness. 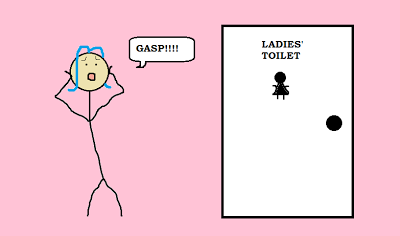 One habit I really can’t stand in Americans is their over-use of the phrase “excuse me.” I often say excuse me; for example, if somebody is in my way and I need to get by.  Americans, however, at least the ones I have come across, say “excuse me” even if they are passing within two metres of me and I have already seen them and moved away in preparation of them passing.  I know it is meant to be polite but I actually find it very rude because it seems like they want me to move away more, or are exaggerating the difficulty involved in moving past me, when I was already moved out of the way.  I find a lot of Americans’ ‘politeness’ to be passive-aggressive rudeness in disguise.  I don’t know if this is truly the case or if they’re just using a tone of voice that I’m not used to.

It’s easy to tell why a lot of Americans are very large, because it’s almost impossible to eat healthily here when everything is so FUCKING DELICIOUS.  I don’t know how I lived before Combos, Snyders of Hanover pretzel pieces, Mac ‘n cheese, grits, and root beer, oh GOD the ROOT BEER; I’m drooling just thinking about how good it tastes. We have junk food in Britain too, but nothing is quite as colourful or corn-syrupy as in the US of A.  The food is so amazing here that I may one day achieve one of my greatest fantasies in life and say these words in a restaurant: 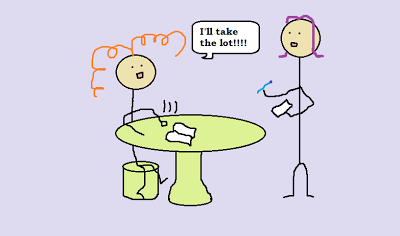 In conclusion, I love Americans; Foofy is American, and he is representing his country-men and women very well indeed, but some things I just can't seem to ignore.