The Perils of Customer Service, PART I

Having worked in the customer service industry for several years, involving a student bar, a trendy bar/club, a classy hotel bar, a student café, a catering company for students, and a catering company for weddings, I have quite a few stories of stupidity, arrogance, entitlement, laziness, lecherousness, and rudeness, and that’s just from one evening.  Seriously, even though I’ve come across some terrible customer service providers in my time, nothing compares to being disrespected when you’re on the other side of the bar, and these customers just took the biscuit (sometimes literally.) I will publish this in three volumes due to the sheer amount of ridiculousness I have experienced in a relatively short customer service career.

The man who wanted a spritzer

I was working at a wedding serving tables food and pouring wine before and after each course; I’d done about 8 of these events already (my main job was to work behind the bar for a café owned by the same company, but I was often poached to work weddings during the evenings), and occasionally I’d get asked for drinks other than what we had, but I kindly explained that only wine (or water) was served during dinner (as that was what the Bride and Groom had paid for) and all the other drinks were locked away upstairs for later.  Now you have to understand that I always went the extra mile for my customers, and hated disappointing people.  Even if it caused me great inconvenience I got a huge rush from knowing I’d made a customer happy; however when you work a large wedding, it’s a little like a military operation and it relies on everyone doing the same thing, so spending more than a minute or so fulfilling the request of an individual customer was rarely possible.  This man wasn’t having any of it.  This is what he said when I came round with the wine, without turning his head 2 inches in order to look me in the eye: 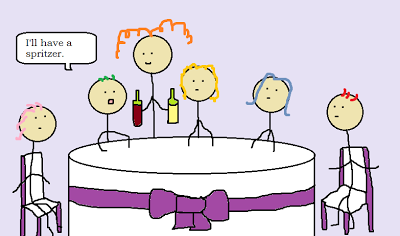 I tried to ignore his inability to use the word ‘please’ and looked at him with a big smile.
“I’m so sorry sir,” I said, “I can certainly get you a spritzer later once I’ve served the starters, but all the lemonade and soda is locked away upstairs.”
He looked at me as if I was speaking Klingon.
“I’ll have a spritzer.” he repeated.  “Now.”
“I’m sorry, sir, but as you can appreciate, we serving staff are working on a very rigid schedule in getting food and drink out, and if I had to go upstairs for your drink, it might affect my service to the rest of the table.”
He looked at me again with cold, cold eyes.
“I’d APPRECIATE you getting me a spritzer.”
“Of course, sir.”

So I had to find a manager, explain the situation, upon which the manager (who seemed to blame me for this) went to get the keys for the upstairs room and the bar inside the room.  I then had to climb three flights of stairs, unlock a large door, unlock the bar, locate the lemonade, bring it down to the kitchen, find a spare wine glass, find a spare bottle of wine, (which was difficult as all the other servers were moving onto serving the starters and I was behind) open it, make the man a spritzer and bring it out to him.  On putting it down in front of him I thought, at the very least, I’d made him happy.

He didn’t say thank you.  Instead, he said- 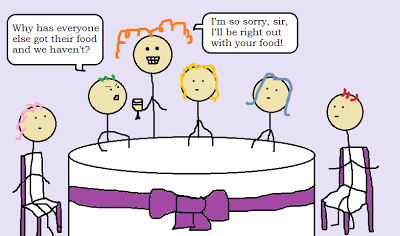 I'm just pleased I managed not to throw the drink in his face.

The woman who didn’t listen

My second story follows directly on from the first, and hopefully both together will prove a testament to my patience.  (A good HUFFLEPUFF quality.)

So the Spritzer man had his wife sitting next to him.  When I brought out her starter (salmon) she said nothing.  That’s fine; even though I was brought up to say please and thank you whenever wait-staff passed food to me, other people are not so well-mannered.  Strangely, when I came to pick the plates up, hers was un-touched.  In fact, both her and spritzer man were gone.  Thinking they had gone to the bathroom, when I brought out the main course (lamb) I put their plates down ready for their return.  Even though she had returned by the time I was collecting the main course plates, her food was un-touched, again, but she silently moved to one side so that I could take her plate away.  I took the plates away (making two trips for the ten-seat table) and returned with a dessert.  Still no thank you, but that was fine.  When I came to take the desserts away, both hers and her husband’s were un-touched, yet again, (after 30 minutes of them being on the table) but I had to take them away.

It's worth mentioning here that we're not in the habit of asking people if everything was alright with their food (like in an ordinary restaurant) because if they didn't like it, there was nothing else available, it being a set menu.  Basically, the only choice was eating the food or not eating it.  Sometimes people would say if they didn't like something, and I'd do all I could to modify it (or give them the vegetarian option instead if there were any spare) but, as I've previously discussed, time was limited, and I'm not a chef.

On returning to deliver more wine, spritzer man beckoned me over.

He spoke in such a rude and disgusted way I thought for a moment that I’d done something awful, like put slightly the wrong amount of lemonade in his spritzer.

“Could you perhaps get my wife some biscuits or something?” He spat, “She wasn’t able to eat any of the food, and she was offended when it was put in front of her, being VEGETARIAN.  She's spent most of the meal throwing up in the bathroom.”

I was so dumbfounded I could hardly bring myself to speak.  (tautologous, I know.)

You see, all guests have to say in advance if they have any dietary requirements, but I was well aware that some slip through the net, which is why, at the beginning of every wedding meal, I would say (or a variation thereof):

“Good evening, my name is Singing Duck, and I will be serving you today.  May I confirm that we have no vegetarians on this table tonight?”

If the answer was no, I didn’t leave it there, because I also knew that a lot of people don’t listen when they should.  I’d always make doubly sure by adding:

“So everyone is happy with the salmon for the starter, and the lamb for the main?”

Then again, to be triply sure:

“Thank you very much, I’ll pass it along to the chef that nobody on this table is vegetarian.”

So you can imagine my surprise when I learned that, not only was this lady vegetarian and failed to tell me, but that she also failed to tell me on one of the eight subsequent visits I made to the table.  To be fair, she was in the bathroom for two of them, but surely somebody else could have passed along the message? As a pescatarian myself, I am well aware that certain desserts are not vegetarian, but these ones certainly were, and she’d not touched her’s.  Not knowing how to deal with the situation, I did the only thing I could. 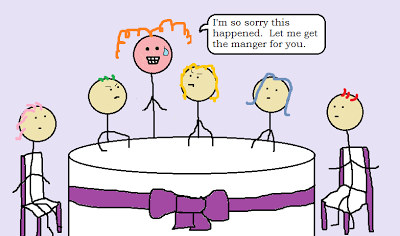 And I walked away, deciding that I was never going to hire a catering company or have a sit-down meal for my wedding if it brought out this kind of entitled behaviour in people.

Come back tomorrow for some more tales of weird and stupid people!
Posted by The Singing Duck at 07:38