How America was really founded

I am now home with my parents for the next few days and I suddenly got a nostalgia attack and went madly searching through all my old boxes and drawers for anything remotely interesting.  I was hoping to find the tale of Hassie Dombed (the girl who died because her insides were scrambled) or, perhaps, even, “Mouse Out”, which was a book I had written about a person-sized mouse that was scared of an ironing board, but what I actually found was something I have absolutely no memory writing at all.

Perhaps we had just studied the founding of America in school, perhaps I was just writing it for fun, perhaps I somehow have inside knowledge of an early voyage to America and all historians should use this piece as a Primary source, but here is an (untitled) masterpiece which I will attempt to illustrate with pictures, although I fear that the 25-year-old me will barely be able to do the 8-year-old me justice.

It was 1692 when they set off on a voyage to America.  On the ship was Captain Bob and the crew members, among them were Jim, Tom, Andy and James.  There was Captain Bob’s wife called Elizabeth and she was very beautiful, and of course there was a cook called Charlotte so they set off across the wide ocean towards America.  When they sighted land they got excited and they jumped up and down! Tom got so jumpy that he crashed through the boat! Everyone on the boat saw his head coming out of the water with a thumbs up, just his way of showing he was okay.  Just as he was about to climb onto land he saw a large bow and arrow pointing at him.  He was taken prisoner by the Indians and he turned and shrugged his sholders at them and Captain Bob got his gun and shot, but he missed and shot Tom’s leg! He was howling with pain and fell over and died. 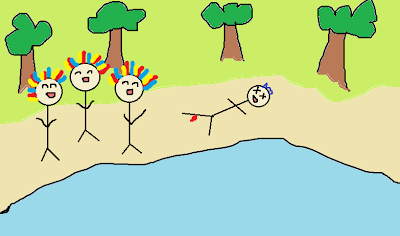 Captain Bob shot again, this time he hit the right spot right in the heart, blood was everywhere and guts and intestines were all over the ground because everyone was fighting. 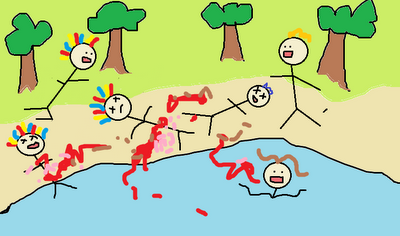 One arrow hit Andy in the sholder but he carried on fighting and became ill and died.  Now only James, Jim, and Captain Bob were still alive so Elizabeth and Charlotte started fighting aswell.  For women, they were very good fighters and they soon caught up and started winning, finaly the Indians surrendered and said they could have their land and went off in a sulk untill Jim got hold of them and said
“Why don’t we make peace or something?”
“Ok” said the Indians and they got their land back. 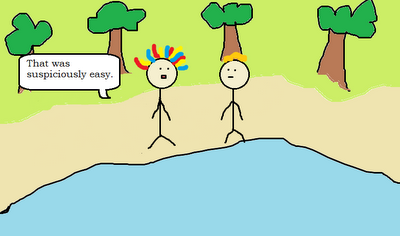 Captain Bob, Jim, etc. had to go back to England, they brought with them a great number of treasures and spices.  They were just about to go when the Indians stoped them-
“You have stolen some priceless articles!” The Indians said.  Then Captain Bob said
“Alright I will have your land back!”
Again they started to fight, blood was everywhere again.  Suddenly Captain Bob shot the leader of the Indian tribe, he fell to the ground with a cut on his cheek, the ground where he fell was stained with the colour red. 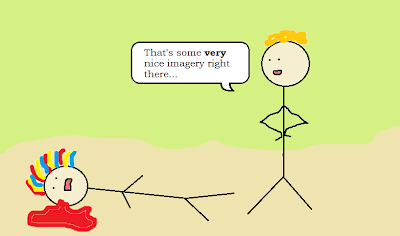 Captain Bob said “Why don’t we discuss this.” So they all sat in a circle and after a long silence Jim said “what was the priceless article then?”
“The diamond” said an Indian.  “It is very old and has been passed down the family since the time of William the first of England, it has been through many battles and bad weather, so it is very special to us.
“Very amusing story” said Captain Bob “But we need to get back to England.”
“You may take all the treasures you want” said the Indian, “but not the diamond.”

So the Indians bidded them goodbye, and they sailed across the wide ocean again towards England where they would take lots of treasure back to the Queen, then she would be very pleased with them and England would be a rich country. 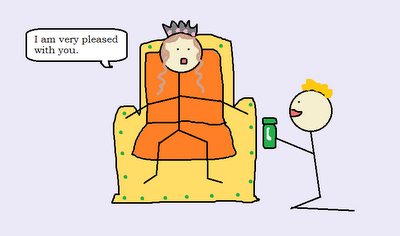 These are my early thoughts:

1. “And of course there was a cook called Charlotte.”- well, blatantly! I can’t think other names a cook could have.
2. “But he carried on fighting and became ill and died.”- I’m not sure what I mean by this- perhaps his hay-fever was playing up.
3. "For women, they were very good fighters..."- I'm glad to see that I was always a feminist.
3. It confuses me that they didn’t ask what the priceless article was BEFORE another fight with blood everywhere.
4. It’s even more baffling to me that the Native Americans would have had a diamond which they had treasured since the reign of William I of ENGLAND…what?!?
5. I was impressed that I knew there was a queen on the throne in 1692 (Mary II), but there was also a King (William III) who I neglected to mention…

On the whole I am actually quite pleased with it; especially the vividness of the fight scenes. What do you think? Should I abandon all other life plans and publish?
Posted by The Singing Duck at 09:57