I don’t remember anything constructive from my childhood; they say that they are the happiest years of your life but all I can remember is PAIN.  I mean, it’s nothing compared to what happened to the boy in “A Child Called It” but I’m talking relatively here; all my childhood memories are of me getting into trouble, not understanding exactly why but feeling absolutely terrible about it all the same.  I’ll be sharing quite a lot of these stories with you, but the first I want to talk about was when I was six.  I know I was six because I remember my year 2 classroom quite well, and I was six for the entire time I was in year 2.

A group of about six of us had been instructed to paint a banner.  Despite remembering pretty much every detail about this story, I have no idea what the banner said on it, but, for the sake of argument, let’s say it said ‘PANDA’.  I’m sure it didn’t, but that was the first thing to pop into my head for some reason.  (It also just struck me that it might have been colouring pencils rather than paint but let’s not split hairs.)  Somebody in charge, our teacher probably, had lightly traced the lines of the block letters, and we had to fill it in with red paint.  Naturally, because we were six, we didn’t do the best job, and we ended up going over the lines a few times: 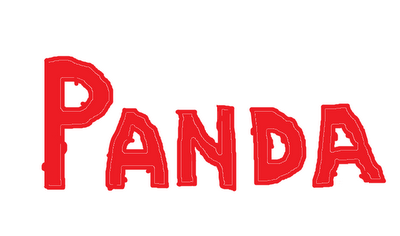 When the teacher saw what we had done, she was LIVID.  Does anyone else remember just how cruel and mean teachers used to be when we were tiny and couldn’t possibly have developed any kind of accurate moral belief system? We were just like the abused animals in one of my previous posts- when the teachers shouted at us for doing something morally neutral but otherwise sloppy, we would mis-understand their reaction and think we had actually done something wrong wrong.  Some children receive so much of this by being repeatedly lazy that they just learn to ignore it, but for me, who only got into this kind of trouble very, very rarely, all it did was confuse me and make me think I was a bad person.  I grew up a nervous wreck, and still feel incredibly guilty about a lot of stuff that I did when I was very small.

Anyway, the teacher was furious with us for being so sloppy with our work.  I remember suggesting that we start over, but she said something like-

“No, no, NO! You’re not starting again.  You’re all just going to have to find some way to fix this, or you’re all going to be in more trouble!!!!”

We stood there, looking at the apparently ruined banner, unable to think of any solution.  Then suddenly, much like it often happened to Leonardo de Vinci I imagine, I was hit with a genius idea that would solve the problem, and make the teacher like me again! We would draw NEW lines for the letters, making them thicker, meaning that we’d have another go at staying within the lines.  Everyone thought my idea was great, and we all got to work.  Carefully, we traced in new lines next to the old ones and filled them in, and the result was great: 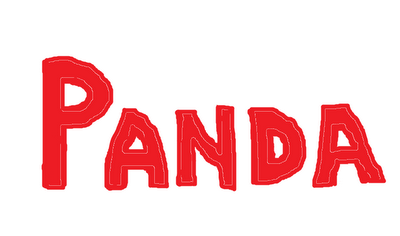 I was very proud of myself, and though I didn’t know this at the time, I was on track to learn a perfect lesson, that we shouldn't dwell on the mistakes we make, but try to figure out how best we can fix them.  I didn’t, however, learn this lesson that day.  When the teacher came over, I was all ready to receive praise for my idea.  She took one look at the banner and what we’d done, and she said- 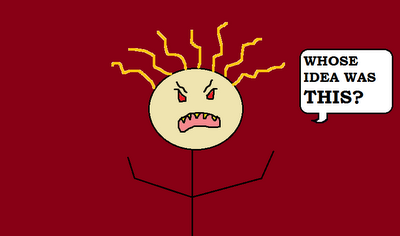 Nobody said anything, then this happened. 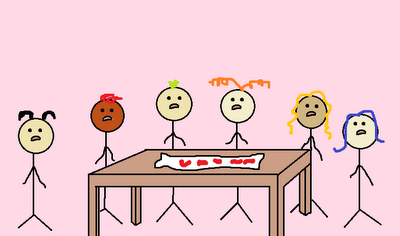 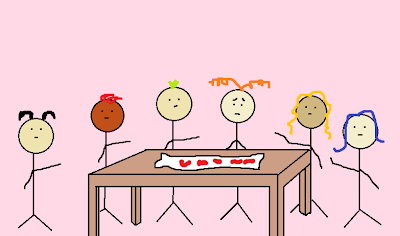 I was told that I should be ashamed of myself for single-handedly messing up the beautiful banner that everyone else had worked hard to create, and that I wasn’t ever to do anything so ridiculously stupid ever again.  To this day I still don’t understand what she was so cross about.

I feel sad now so I need to cheer myself up.  Here's a happy corkscrew: 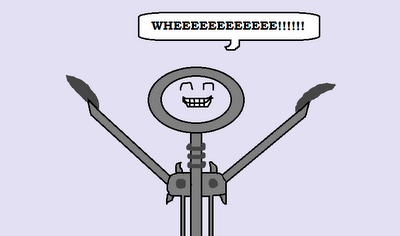