Last week I enjoyed the luxury of a five day holiday in Center Parcs, Sherwood Forest.  For those of you that have not had the joy of going to a Center Parcs holiday village, you, my friends, have missed out.  Foofy and I had a splendiferous time swimming, horse-riding and bird-watching, and we’re going to try and visit again as soon as we can.

One of the best things about the parks is all the wildlife that lives in the forests.  Because they are conservation areas you get to see all sorts of animals that you don’t see anywhere else, like badgers and woodpeckers. (Of course, you are only able to see the badgers if you get up at two in the morning and sit for three hours in the dark with binoculars which we did not do, but they are there all the same.) There are also, very importantly, many, MANY ducklings.  Foofy was woken up one morning at 7am by me shouting- “DUCKLINGS DUCKLINGS DUCKLINGS DUCKLINGS DUCKLINGS!” He sat bolt upright in bed and looked panicked, before realising that I was happy about the four ducklings and their mother who had come to visit us in our little house.  We opened the doors and gave them seed.  Ducks were not the only visitors to our house; we had squirrels and rabbits as well.  One squirrel actually came IN to our house and ran around in circles a few times before running out again.  The bunnies who lived at Center Parcs were particularly happy bunnies- we often saw them running around and playing games with each other which seemed to involve seeing which one of them could jump the highest.

Our favourite animals in Center Parcs were the Moorhens.  They are beautiful black water birds with red beaks and green/yellow legs, not to be confused with coots, which look similar but have white beaks: 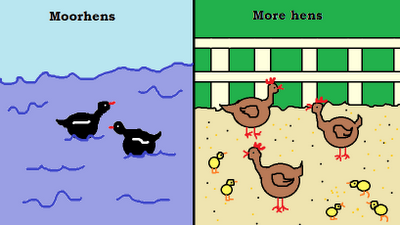 Anyway, the moorhens were very, very sweet little birds.  The babies, though perfectly able to feed themselves after reaching a certain age, always preferred to be fed by their mother.  One chick that was pretty much the same size as it’s mother and had most of its primary feathers was happily eating seed by itself, but when its mother came along it crouched on the floor as flat as it could go, spread its tiny wings, opened its mouth wide and made pitiful little yelping sounds.  Its mother, obviously thinking that the chick was too old to be fed, was completely un-moved by its cries for attention and ignored it.  The chick, when it realised it wasn’t going to be fed, simply stood up and carried on picking seed up off the ground by itself.  On the last day, we saw a mother with two of the tiniest chicks we’d ever seen.  They were so small that they could fit underneath her in her nest: 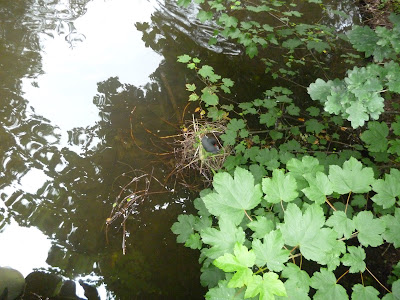 Don’t worry, we were standing quite far away from the nest on a bridge and so didn’t disturb her.  If you look very closely you can see that she had used a plastic drinking straw for her nest! Foofy thought that this was a very sensible idea as she would be able to drink water from the river through the straw.  She was also sitting on two eggs, which we knew because she left the nest several times to find food.  The chicks were so small that they were scared of the ducklings, which were tiny themselves, but about three times as big as the chicks!

Also on the last day, we decided to get up at sunrise to see if we could see any unusual morning animals, but nobody was around at the wildlife hide, which was a shame.

I LOVE animals!
Posted by The Singing Duck at 05:27