I thought it was probably time to explain why it is that my blog is called what it is.  If you’ll cast your mind back to one of my early lectures; "Ducks," you will remember that I like ducks a lot and would even go as far as to say that I am one.  I’m certainly going to dress up as one when I get married anyway.

Everyone knows that ducks quack, but not everyone knows that only female ducks quack.  If we’re being technical that means that ‘ducks’ quack and ‘drakes’ don’t, but referring to drakes as ‘ducks’ is so widespread that it’s effectively become correct through repeated usage, much how both ‘Aluminium’ and ‘Aluminum’ are correct (though my computer disagrees.) It’s also not common knowledge that not all ducks do quack.  I’ve observed ducks very closely over the years and, while some of them make a very distinctive ‘quack’ sound, others simply just ‘peep’ or ‘squawk’, apparently unable to quack even when in great distress.

Ducklings, you see, only ever peep.  I happen to think that the sound of peeping ducklings is perhaps one of the most wonderful sounds that can be heard in the world.  There must come a time when the female ducklings learn how to quack, be it gradual or sudden.  I also imagine that it must be a sign of the duck earning some sort of status when she does learn how to quack.  I connect it, in my mind, to a girl becoming a woman; there is no exact point when this happens, and, if it never does, it certainly doesn’t imply that the girl is any less intelligent, witty, beautiful, mature, and so forth.  I happen to consider myself to be all of these things (especially 'so forth'- that just describes me to a T), but I don’t consider myself to be a woman.  This may be partly because when I do a poo I always call Foofy in to look at it (though I’ve been doing a lot of ghost poos recently rendering this impossible) but there is something deeper involved as well.  I was given an incredible book for my birthday last year called ‘How to be a Woman’ by Caitlin Moran, and she discusses a lot of this stuff too.  (expect she doesn’t mention the duck analogy anywhere in her book, which I believe to be a gross oversight on her part.) A girl becoming a woman is like a duck finding her quack- it might never happen, and, when it does, I imagine it’ll be in the most unexpected way.  This blog is just about me and my wacky adventures, and maybe one day actually growing up.

But if it never happens, I’ll just go on peeping forever, and that's fine too. 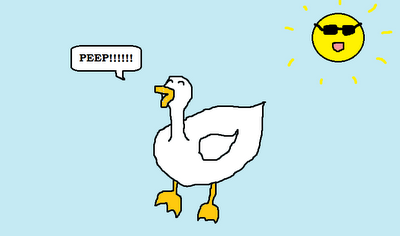