I bought a book a few years ago called “Found” (I also think it’s a website but I’m too lazy to look) where they publish notes that people have found in the street.  I found a note in the street myself about two years ago, but, again, I’ve been too lazy to scan it in until now.  It appears to be a short one-act play about a crumbling relationship.  I think it has some rather special moments, but I'll let you all judge it for yourselves: 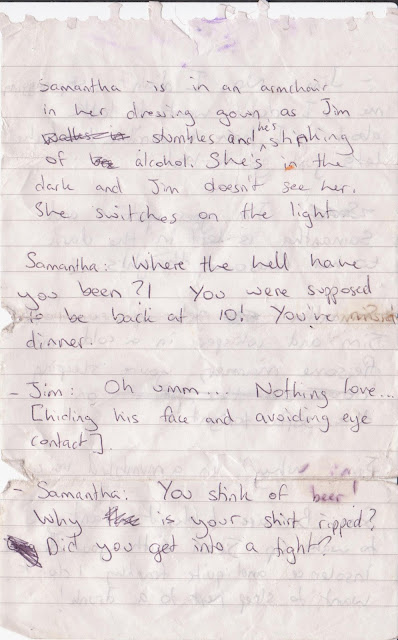 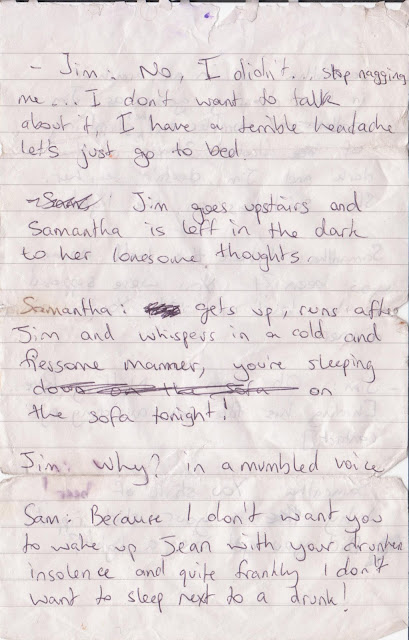 I'm not sure what it is that I like best about this short play; the careful characterisation of Jim and Samantha, the expressive prose throughout (especially the explosive "and quite frankly I don't want to sleep next to a drunk!" at the end) or the remarkably clear stage directions given, allowing the reader to vividly picture the scene.  I'm sure we've all been in the situation above many times.  Goodness, these men of ours! Always getting into fights and coming home stinking of alcohol, am I right, girls? Foofy will be sleeping on the sofa tonight! He hasn't actually done anything wrong yet, but he's a man so I'll be making a pre-emptive strike.  I won't be having any of his drunken insolence under my roof.