Today, I woke up and asked Foofy what I should write about for my blog because I couldn’t think of anything.  He said-

“Why don’t you write about fuzzy?” 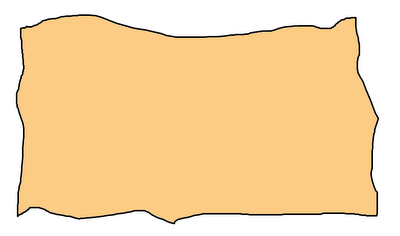 That’s all I have to say about Fuzzy, really.

“I dreamt I got an arrow to the knee.”

The dream was actually quite exciting; Foofy was with Edward II and they were travelling to see ‘the wizard’.  Foofy needed a bandage for his knee (that had been shot at from the sky) and Edward II needed a man-friend.

It was when I was working as a Catering Assistant for my university.  It was my job to serve the food from the hot plates and then to wash up all the plates and glasses afterwards and put them neatly away.  One day, this all went terribly wrong.  It was the same day, actually, that I made this joke (regurgitated from a previous post!) to one of my colleagues: 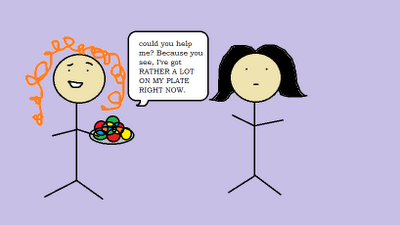 And I like to think that what followed was comeuppance for the terrible joke.  It was time for us to put away all the plates and glasses, and I happened to be carrying a pile of ceramic bowls through the serving area.  The serving area had just been cleaned so it was quite slippery, and I slipped and fell, breaking several bowls as I did so.  In fact, it was a miracle that I only managed to break about 3 bowls out of the 20 that I was carrying.  That was my first thought.  My second thought, as I got up, was that my knee was hurting a bit.  I didn’t think too much about this as I was more concerned with picking up the bowls, a bit cross with myself.  While I was picking the bowls up, a couple of my colleagues entered, having been attracted by the noise of all the bowls falling on the floor.  One of them went to help me, then just froze about 2 metres away from me.

Dumbly, she just pointed to my leg.

I looked down, and saw that I had a long trail of blood going from my knee all the way down to the floor, where it had made a small puddle.  This confused me, because it didn’t hurt that much.  I touched the wound and kind of pulled it apart and more blood came out.  The girl looked terrified and went to get someone.  I shrugged; not understanding what the fuss was about; it was just a little cut.

The manager came out less than ten seconds later, saying- “You’re going to need stitches for that.”

But everyone ignored the joke, possibly because I didn't point to my knee or make any other indication that I was trying to make a pun.

2 of my other colleagues were now trying to mop my blood up off the floor, but as soon as they had finished, more took its place.  I just kind of stood there watching them, giggling like a crazy person. 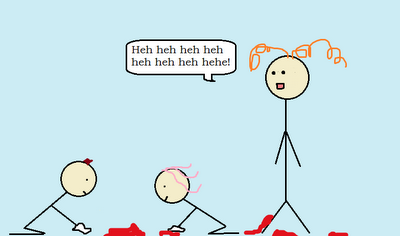 The manager led me into her office, and I was rather surprised to feel that neither of my legs felt like walking.  All I could feel was a slight stinging sensation in my leg, and all this excitement around it made me feel like laughing, which I did.  She called a taxi to take me to the hospital while bandaging my leg up.  I remember at this point being simply annoyed that I hadn’t injured myself before, as my shift had only 10 minutes left in it, and if I’d had to leave early due to injury I’d have got the rest of the money for the shift.

After the manager had bandaged me up she made me sign a form saying that the accident had been my fault.  This was a little silly because, although there was a ‘wet floor’ sign up I was being extremely careful, and I still fell over.  It seemed to me that the problem was the floor, not me.    However, it isn’t as if I would have sued them anyway, and they were very good about it, offering to pay me for any shifts I couldn’t do as a result of not being able to walk on the leg (which, incidentally, was none) and they put a sign up telling people to put the bowls and plates away BEFORE the floor is cleaned next time.  All was well.

Anyway, I’d been bandaged up and was taken to the taxi.  I kept thinking that the fuss everyone was making was very silly- I was still convinced that I didn’t need stitches and was just laughing manically the whole time and saying- “I’m FINE! Don’t WORRY!” The taxi driver got the full, uncut version of the story, including the joke that preceded it, and including the fact that I kept saying that I was FINE.  As he helped me to the hospital door despite my protests- (don’t worry about me, I’m fine, I really am!!!!) A smiling nurse came out to greet me.  She led me to a room and lay me down on a bed.  We chatted about what had happened in a jovial way.  She knew that I was fine really and this was just a simple cut; nothing to worry about.  She said that she was going to take the bandage off and have a look, and I said that that was fine, and that I felt fine, so she didn’t need to worry at all.

What happened as she removed the bandage I can remember in vivid detail: 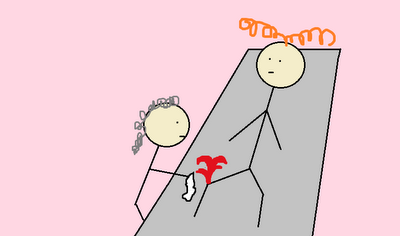 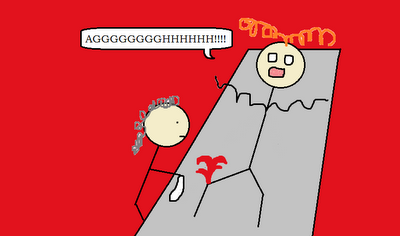 I mean, the blood probably didn’t spurt QUITE as high as that but it was pretty close.  After that, all notions of being fine went out of the window, and I just starting screaming, and screaming, and screaming.  Until that day I had always complained of panic attacks, but I now knew that those attacks were nothing more than tiny anxiety episodes.  THIS was a real panic attack; I lost the power of rational thought, I lost the ability to breathe and I was shaking uncontrollably.  I still couldn’t even see what the problem was.  I vaguely heard the nurse tell me that she had to give me three stitches and I was more scared of the injection to numb the stitches than I was about the stitches themselves, as it had to be given INSIDE the wound.

I refused point blank to have the injection- a second nurse had to be brought in to restrain me as I kept trying to stop her getting to me with the needle.  I wasn’t actually ASSULTING the woman, and the nurse who pinned my arms to my side was not actually restraining me, more just gently guiding me towards the correct course of action.  She kept trying to talk to me about my hobbies and interests while the first nurse was injecting me, and I got cross and said that she was trying to trick me into calming down, then I felt bad and said through my tears and shaking that I liked to sing and that my interests involved not getting injected in the vagina in my leg.  I’m not sure why I said it like this, but I think it was because when I’d caught a glimpse of it just after the accident it did kind of look like a vagina.  The second nurse just looked a bit concerned and didn’t ask any further questions.

As it turned out, I only got two stitches because I started to feel the third one: “I CAN FEEL IT I CAN FEEL IT ICANFEELITICANFEELIT!!!!!” Is what I said, I think.  As I was being bandaged up I gradually calmed down (with the help of a third nurse with a paper bag) and I apologised to the first nurse for acting so crazy before.  I remember saying:

“Do other people behave this way when they get stitches?”

There was a pause where she tried not to look me in the eye, then she breathed out slowly and said:

“Everyone’s different.”
Posted by The Singing Duck at 01:41