I was a disturbed child

I think I was probably a very, VERY disturbed child.  I remember being constantly fascinated with death and people getting torn apart by monsters.  (I also used to draw a lot of pictures of people standing on top of houses but that is less easily explainable- perhaps they wanted to jump off?)  Here are a couple of pictures that I drew when I was very young: 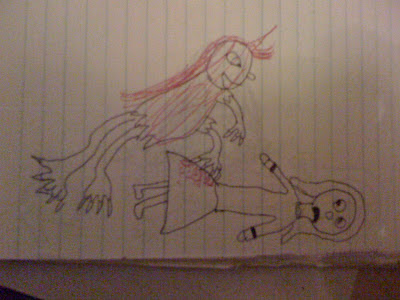 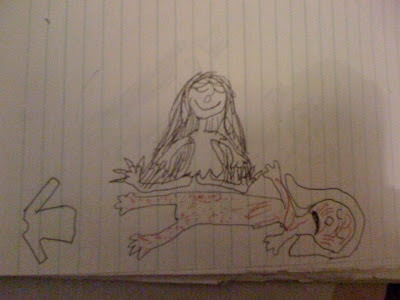 What I like most about the second picture is that the girl’s clothes have been very carefully removed by the crazy girl monster with the claws, probably in preparation of her being eaten, but I didn't get round to drawing that.  She seemed very pleased with herself regardless. Logically, I imagine that I am meant to be the wild crazy girl and I am imagining killing all the schoolmates that used to bully me, but, is this normal? I have no idea.  another explanation is that BOTH the girls are me and I wanted to 'kill off' the nice, polite, shy part of myself that had been the cause of me being targeted by bullies in the first place. The crazy girl also seems to be half unicorn in one picture (but, strangely, not in the other) which is somewhat awesome; I want to be that girl!    This is by no means an isolated incident of craziness; there are pages and pages of this kind of thing in my old notebooks.

I also drew a comic (though I can’t find it now) of a girl who grew taller and taller until she died.  There was also one that I remember vividly about a girl (whose name, I recall, was ‘Hassie Dombed’) whose insides had become all scrambled and she suddenly died.  There was even a picture of her best friend crying while holding Hassie’s favourite toy.

Perhaps all children go through stage of being fascinated by death but the vividness of the pictures and the creativity I possessed when inventing new and horrible ways of people being killed is a little alarming to me.  I never believed in God or Heaven so the thought of dying was always very scary, and I found myself constantly trying to find ways that an afterlife could exist, but eventually realising that I couldn't make it work in my head.

I ended up hoping that when we die, our mind projects an afterlife for us, and, though really only a few seconds will pass within it, our mind will also find a way of making it seem like it lasts forever.  Having said that, I think the idea of living forever is actually a lot worse than death.  Even Pokemon would get boring after a while.
Posted by The Singing Duck at 04:02