The Llama, after the duck, is my second favourite animal.  I first became acquainted with a llama when I was about 15 and went on a visit to a farm;  I was given a bag full of feed and encouraged to put it in my hand and let the animals eat out of it.  When I first saw this beautiful creature it was like time had stopped. 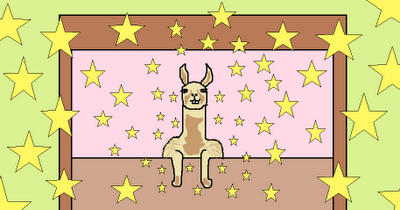 I approached the llama with hesitation as I had heard that they spit and was worried.  When I put my hand out flat for the llama to eat out of, it behaved like it’d never eaten in its life.  Within moments, the feed in my hand had gone, and it had licked it clean.  It then looked at me.  It looked at my hand quizzically.  It looked at me once more with a look of absolute disgust on its face, then it spat in my hand.  Ever since then, I’ve been in love.

Unlike ducks, I have a very clear reason in my mind why it is I like llamas so much; they are actually, putting the above story aside, incredibly affectionate, gentle creatures.  If you don’t believe me, go on a llama trek and I promise you that you will be converted in just a few minutes; they often nudge you with their heads, wanting to be stroked, and will make pitiful groaning noises while doing so.

Llamas, though affectionate, are very proud-looking creatures.  They strut around their pens as if they are royalty, and will gaze on passing humans and animals as if they are scum, despite probably actually wanting to be their friend.  Though they act in this way, in reality they are clumsy, ridiculous animals with spindly legs and massive, fat, hairy bodies.  It reminds me of myself in a way; when I make an effort I scrub up pretty well if I say so myself, and I am very good, with my RP accent, at making it seem like I’m a civilised, unemotional human being.   However underneath my cold, heartless exterior, I just want to be loved, and I may be looking at you with gentle amusement while daintily holding a champagne glass, but in reality I’m probably inventing a joke about poo in my head.  Essentially, llamas remind me of myself, and I like myself quite a lot, therefore I like llamas quite a lot too.

Llamas are, as well as being affectionate and hilarious animals, are incredibly useful to have around; as well as being able to carry a large proportion of their own body weight, they are also commonly used as guard animals for chickens, ducks and other livestock.  It seems crazy, but, put a llama in with a bunch of small animals and it’ll keep them safe from foxes, wolves and so forth.  People also eat them in Peru but let’s not go there.

The reason llamas have a bad reputation is because quite a few of them have been raised poorly.  Though baby llamas (i.e. Crias) are very, very cute, they must not come into much contact with humans.  Some people may be tempted to raise a llama from a baby so as to form a close bond with it, but you MUSTN’T do this.   The llama, if handled too gently, will grow up and develop what is known as “MALE BESERK SYNDROME”, which is probably the best name for a disease ever as it makes me imagine this: 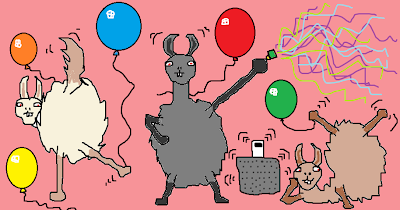 However it is not a very nice disease for your llama to have, as it basically means that it thinks that YOU are also a llama.  Llamas settle internal disputes by spitting, or, in severe cases, ramming into each other, so you can see why you wouldn’t want a llama to think you were a llama as well.  This actually reminds me of a sign in a petting zoo I saw near San Diego: 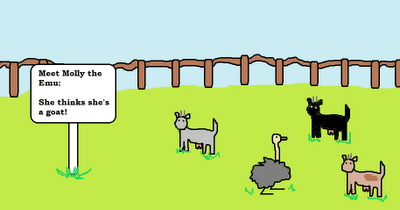 It is baffling to me how the sign-maker could have known that Molly thought she was a goat, as, apart from the fact that we can't even tell what other humans are thinking, let alone emus, she was displaying some very un-goat-like behaviour, other than apparently liking to be around goats.  I like to be around chairs, but I don't think I am one, that's just silly.  Anyway, spitting llamas are a result of them being too close to humans when very young, and thus not understanding that humans are distinct to llamas.  Properly raised llamas never, EVER spit at people, and they are an absolute joy to be around.  So, what have we learnt today? (Apart from the fact that I can't draw goats.)  Llamas are beautiful, fascinating, misunderstood creatures.  Try a llama walk, and see for yourselves.
Posted by The Singing Duck at 06:00