These are some of my best friends.  I am not including my most precious childhood friends as I feel like they are too private for a blog, but I may change my mind later.  I will discuss a select few of them today: 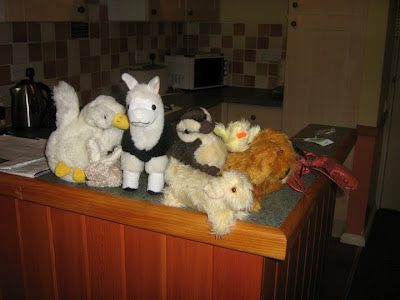 I don’t have any separates of Lucie, VB or Rachmaninov, but they are all very special.  Rachmaninov, as you may be aware, is a lobster, and he is named after this composer and pianist because he has big hands.

This is Tessa, riding in a rucksack: 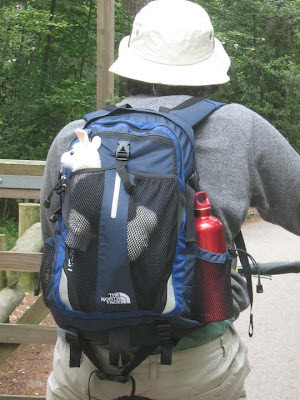 I have known Tessa for about 7 years now, and I almost didn’t at all.  I was visiting Rotterdam zoo in The Netherlands, and I saw her in the gift shop, but didn’t think I could really afford to spend the money on her.  My entourage and I made our way back to the entrance of the zoo, which took 20 minutes, then I had a sudden change of heart and we had to go all the way back to buy her.  I don’t regret it for a minute.  Tessa’s main job is to protect the other friends from enemies.  When she sees something alarming, she stretches her neck down to the ground and charges.  Go, Tessa!

Although Jacob isn’t in the above photo as he is a relatively recent addition, here he is: 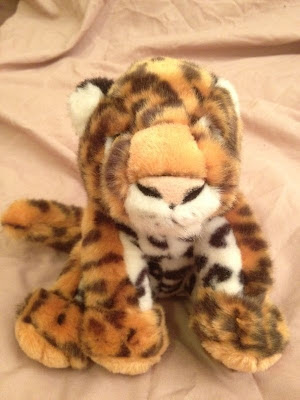 Jacob is named after the “Lost” character for no particular reason.  He is a leopard, but recently had a bit of an identity crisis when he saw himself on TV being described as a Jaguar.  The WWF are doing a lot of good work, but have succeeded in confusing Jacob no end.

Jacob doesn’t really have a career, but tends to mooch off Wee Wee Pup’s success as they are best friends.  I’ve started to think there may actually be something more going on between them but Wee Duckie is very defensive of Wee Wee Duckie and gets pissed off when I mention it.  I've now washed my hands of the whole affair.

This is Wee Pups: 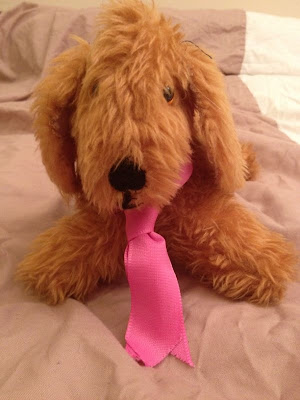 As you can see by his tie, Wee Pups is a business man.  He’s actually Lord Sugar’s boss and makes £200 billion a day.  He has an astonishing amount of business acumen and drive to succeed.  He always gives 110% and rolls with the punches, but you haven’t seen the best of him yet.  He doesn’t like chancers, or bum-lickers, and he’s got a problem with the hole in his bloody arse.  Though Wee Pups is a very serious business man (he is currently in China on business), when it’s the weekend, it’s party time, and he lets his hair down considerably: 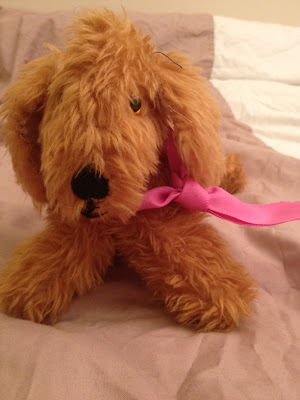 This is Wee Duckie: 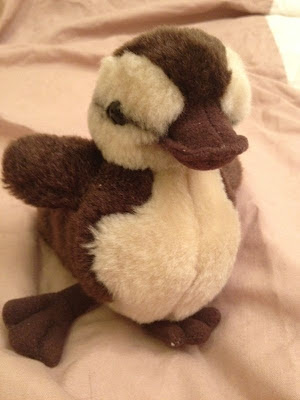 Wee Duckie is a party planner, and often hosts masked balls for London society.  She loves to stir things up and always reads gossip magazines so that she can keep abreast of the latest celebrity news.  Wee Duckie also does a lot of charity work and helps Wee Pups handle his massive fortune.  They own houses in London, Paris, New York and Tokyo, as well as holiday homes in Majorca, Qatar, South Africa, and Quebec (for skiing).  Wee Duckie is an innovator in the fashion world, and, chances are, if you are wearing something now, Wee Duckie was probably wearing it three years ago.

This is the happy couple, listening to some tunes: 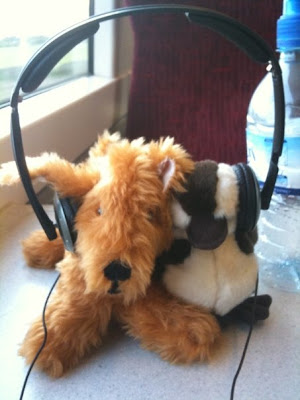 This is Wee Wee Pups: 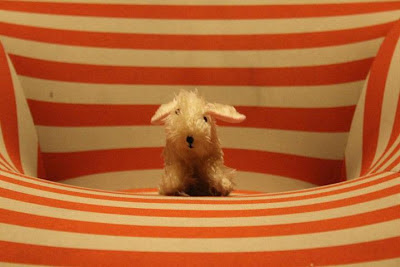 You may not have heard of Wee Wee Pups as he often goes under different stage names, but no doubt you will have seen him if you’ve ever gone to the theatre in London as he is currently performing the lead role in every West End Show simultaneously, including Jean Valjean in ‘Les Miserables’, Simba in ‘The Lion King’, and Galileo in ‘We Will Rock You.’  Wee Wee Pups is an operatic bass, but can actually sing Tenor better than anyone else as well.  Wee Wee Pups is often present at high-profile auditions, and, while he is ruthlessly fair in his selections, he doesn’t take any shit from anybody.  Having said that, he can be very emotional when need be, and has a history of being in one-sided relationships.  Wee Wee Pups is pre, pre-engaged to Wee Wee Duckie, who seems oblivious to his struggles with his sexuality and only likes him because he is yellow as well, so the arrangement works out well for them both.

This is Wee Wee Duckie: 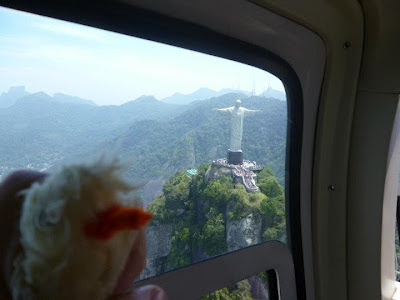 While in Rio she became a hatched-again Christian and wanted to fly up to say hello to Jesus, and she got so far away and lost that I had to go up in a helicopter to rescue her, otherwise she would have been flying round and round Jesus for eternity probably.  When she was back on Earth she had already forgotten about Jesus and decided that she was Buddhist from that point, but I am unaware of any other religious developments since then.   Wee Wee Duckie, as you may have guessed, is not gifted in the brain department.  She often forgets who I am and who she is, and, when we play a game with her, she always has to be yellow, because she is also yellow (blonde).  She often asks me what very simple words mean, and again, five seconds later, because she has forgotten.  The other friends have a huge amount of affection for Wee Wee Duckie as she isn’t very bright at all, but what they don’t appreciate is that she is actually a very talented nurse.  Though she doesn’t understand how she does it, she can make anyone feel better about anything, and she likes to dry people’s tears with her wings.  We do worry, though, that she is secretly a Nazi, as when I put her down, one of her wings naturally goes into a Hitler salute.

Despite their lack of anything in common on the surface, and any personal struggles they may face, Wee Wee Pups and Wee 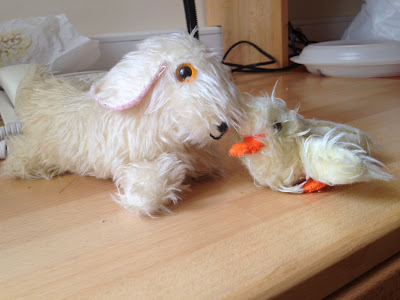 As you can probably tell, some of the friends are home made, as they have loose threads and their eyes are a bit wonky.  They may not be perfect, but I love them all the same.
Posted by The Singing Duck at 04:14